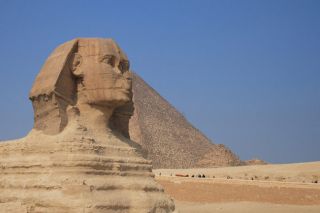 The Great Pyramid at Giza is both the oldest ancient wonder and the only one still standing today. It was built as a mausoleum for the pharaoh Khufu around 2650 BC and for over 4,000 years remained the world's tallest structure.
(Image: © Photo Credit: Dreamstime)

Amid rumors of mysterious groups planning to hold 11/11/11 ceremonies at the Giza pyramids, Egyptian officials closed the largest pyramid of Khufu until Saturday morning, the Associated Press reported today (Nov. 11).

The closure is for routine maintenance, according to Egypt's antiquities authority, but online chatter and local media reports have focused on rumors that "Masonic" or "Jewish" rites were planned on the site at 11:11 a.m. local time on Nov. 11, 2011. According to the AP, Egyptian officials said nothing out of the ordinary happened at 11:11.

The Egyptian pyramids are a consistent focus for conspiracy theorists, with believers arguing that human hands could not have built these huge structures. (Aliens often get the credit.) Conspiracy theories also swirl around supposed secret chambers and passageways in the pyramids as well as the mathematics of the architecture.

Increasing the hype around the pyramids and 11/11/11, al-Asfar told the AP, is the fact that last month an Egyptian company requested permission to gather 120 people to "hug the pyramid," joining hands around the largest pyramid's base. That request was rejected, as-Asfar said, but it triggered online protest among Egyptians nonetheless.