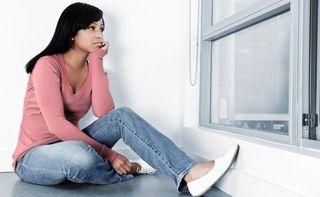 Although the risks for depression, stress and binge-drinking dropped for bisexual men as they got older, the odds did not decrease for bisexual women, the study found.
(Image: © Elena Elisseeva | Dreamstime)

Bisexual women are more likely than their male counterparts to abuse alcohol, smoke and suffer from depression and stress, according to a new national study.

The researchers aren't sure why the young women had more health issues than bisexual young men, though they have some theories.

"There's a lot of prejudice against them," study researcher Lisa Lindley of George Mason University's College of Health and Human Services said in a statement. "They're told, 'You're confused — pick one.' There tends to be this expectation or standard that a person picks one sexual identity and sticks with it. I think there's a lot of misunderstanding about bisexuals. I think their risk has a lot more to do with stigma."

Bisexual young women may also have less community support and more fluctuating sexual identities than bisexual young men, which could also be responsible for the depression and stress, the researchers suggest.

The researchers looked at three different dimensions of sexuality — sexual identity, sexual behavior and sexual attraction — and studied their links to various health outcomes. Results from the initial survey showed that both girls and boys who identified themselves as bisexual in the initial survey were at a higher risk for depression, stress and alcohol abuse when they were teenagers.

Results from the second survey showed that although the depression, stress and binge-drinking risks dropped for bisexual men as they got older, the odds did not decrease for bisexual women.

The researchers are unsure of why the bisexual male participants fared better than the female ones. "Perhaps it's because men, if gay or straight, have a stronger connection to their community. Bisexual women may not feel as if there is a community for them," Lindley said.

Without secure connections to a community they can relate to, these women may be more isolated and feel that as though they don't have anyone to talk with who understands, the researchers said.

The study also showed that more young women than young men reported being attracted to both sexes and identified themselves as "mostly" straight or bisexual, rather than definitively straight or definitively bisexual.

"Women are more likely to have sexual identities that fluctuate over time," Lindley said. "Whereas with men, it tends to be either 'I'm straight' or 'I'm gay.'"

The researchers noted that more studies are needed to understand the links between bisexual women and risks for depression, stress and alcohol abuse. However, the researchers warned against stereotyping bisexual individuals based on the study's findings.

The study was published online Oct. 21 in the American Journal of Public Health.