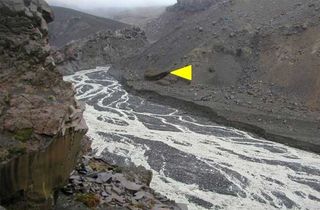 This image of the lahar channel shows the area right after the collapse of New Zealand's Crater Lake's walls.
(Image: © University of Hawaii)

A mudflow that recently burst through the banks of a volcanic lake in New Zealand gave scientists an up-close and personal view of the freak event and a chance to test their disaster warning systems.

The mudflow was of a type called a lahar, in which water and sediments flow down from a volcano either when snow and glaciers rapidly melt during a volcanic eruption or when the water in a volcanic crater lake breaks through its banks.

In this case, Crater Lake, atop Mount Ruapehu on New Zealand’s North Island, was predicted to overtop its banks in 2007 but had recently stopped filling as rapidly, and the forecast was pushed back to 2008.

But several days of intense rainfall caused the lake’s banks to collapse much sooner, on March 18, 2007, releasing about 1.3 million cubic meters of water. Visiting scientists were on hand before and after the event to observe it.

“We found a broad area covered in a veneer of mud and boulders,” said volcanologist Sarah Fagents of the University of Hawaii at Manoa. “It was an unprecedented opportunity to see the immediate aftermath of such an event.”

A lahar warning system installed on Ruapehu successfully alerted officials to the onset of the lahar. Prediction of lahars is particularly important in populated volcanic regions such as Washington state and Indonesia.

“Lahars can be extremely hazardous, especially in populated areas, because of their great speed and mass,” said William Leeman, a program director for the National Science Foundation, which funded the work. “They can flow for many tens of miles, causing catastrophic destruction along their path.”

“The 1980 eruptions at Mount St. Helens, for example, resulted in spectacular lahar flows that choked virtually all drainages on the volcano, and impacted major rivers as far away as Portland, Oregon,” he added.

No major damage was done by the Ruapehu lahar as officials closed off roadways and shut down train lines, and the mudflow failed to overtop the river channel it rushed down.