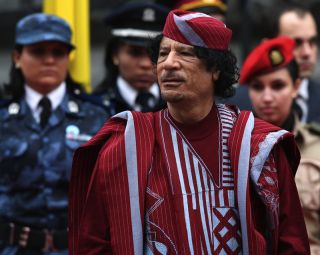 Muammar Gadhafi on a state visit to the Ukraine in 2008. Behind him are his "Revolutionary Nuns," the elite all-female group of bodyguards that accompanied the Libyan leader everywhere.
(Image: © Mark III Photonics / Shutterstock.com)

In the aftermath of Moammar Gadhafi's death, obituaries have been quick to mention the Libyan dictator's strange ways. He traveled with a retinue of attractive all-female bodyguards, dressed in military uniforms and make-up. He sported colorful, attention-grabbing outfits. He preferred to receive visitors in a full Bedouin tent, even erecting one in Bedford, N.Y., in 2009 on property rented from Donald Trump.

Plenty of dictators have indulged in strange behavior, but Gadhafi's quirks were unique, according to Jerrold Post, a political psychologist at George Washington University. One thing he did have in common with other dictators, Post told LiveScience, was a narcissistic personality.

Many dictators are known for odd behavior. Mao Zedong, the Chinese communist leader, allegedly refused to brush his teeth, according to "The Private Life of Chairman Mao," (Random House, 1996), a memoir by Li Zhisui, Mao's physician. Mao's disinterest in dental hygiene may have heralded back to his peasant roots.

In other dictator-dental news, late Turkmenistan "president for life" Saparmurat Atayevich Niyazov, who ruled until his death in 2006, suggested that his subjects chew on bones to strengthen their teeth, drawing the lesson from dogs. Niyazov also took to renaming months after members of his own family.

Some leaders' eccentricities seem designed to cement their power. Francois "Papa Doc" Duvalier, who ruled Haiti from 1957 until 1971, once ordered all black dogs in Haiti put to death after being told that a political rival had transformed into one. Duvalier built a cult of personality around himself, reviving voodoo traditions and declaring himself God's chosen one.

But quirkiness is by no means a universal trait among dictators, Post cautioned. Saddam Hussein, for example, was not known for weirdness, nor was Joseph Stalin. [Understanding the 10 Most Destructive Human Behaviors]

What many dictators do have in common, Post said, is a trait called "malignant narcissism."  Malignant narcissists are extremely self-absorbed, and see themselves as saviors of their people. They have a paranoid attitude, blaming outside forces when things go wrong. Gadhafi, for example, blamed both the West and Al Qaeda for the Libyan uprising, even claiming that someone had slipped hallucinogens into the rebels' Nescafe.

Malignant narcissists also lack a conscience, and are willing to use whatever aggression is necessary to get their way, Post said. And because they are in total control, there are few societal checks on their personalities.

"As dictators, as opposed to democratic leaders, they are able to shape their country to fit their own psychology," Post said.

Gadhafi, however, may have gone beyond typical malignant narcissism, Post said. Some of Gadhafi's behavior was reminiscent of borderline personality disorder, he said, a disorder marked by unstable mood and behavior.

"He could get really high when he was succeeding, and act as if he felt he was totally invulnerable," Post said. When things weren't going well, Gadhafi could be just as unstable, as in his insistence during the Libyan uprising that his people loved him.

Some of Gadhafi's seemingly bizarre behaviors make more sense when viewed in the light of borderline personality and malignant narcissism. In the 1970s, for example, Gadhafi funded and supported the American religious movement The Children of God, which held among its more controversial beliefs that sex was an acceptable recruitment and conversion tool.

The leader of The Children of God, David Brandt Berg, was possibly himself a malignant narcissist, said Stephen Kent, a University of Alberta sociologist who has studied the group.

"Especially in the early days, Berg was virulently anti-American, and that anti-American virulence fit very well with Gadhafi," Kent told LiveScience. "Each thought the other legitimized himself."

Thanks to The Children of God's free love tendencies — they called proselytizing with sex "flirty fishing" — at least one child was born from a union between a woman in the group and a high-ranking official in Gadhafi's regime, Kent said.

Underlying the delusions of grandeur of a malignant narcissist, however, is a sense of deep insecurity and low self-esteem, Post said.

Sometimes this insecurity has tragic consequences. Ugandan dictator Idi Amin was insecure about his lack of education, Post said, and he took out that sense of insecurity in deadly purges against intellectuals in his country.

As for Gadhafi, his sense of narcissism likely stayed with him until the end, Post said.

"He was not so psychotic that he could deny what was happening or that he'd lost his power," he said. "Having said that, I think he found it difficult to believe that it was his own people rising against him."