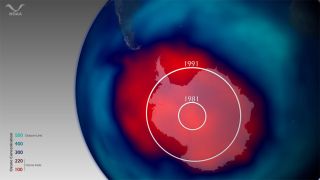 The ozone hole above the Antarctic has reached its maximum extent for the year, revealing a gouge in the protective atmospheric layer that rivals the size of North America, scientists have announced.

The Antarctic ozone hole was first discovered in the late 1970s by the first satellite mission that could measure ozone, a spacecraft called POES and run by the National Oceanic and Atmospheric Administration (NOAA). The hole has continued to grow steadily during the 1980s and 90s, though since early 2000 the growth reportedly leveled off. Even so scientists have seen large variability in its size from year to year.

On the Earth's surface, ozone is a pollutant, but in the stratosphere it forms a protective layer that reflects ultraviolet radiation back out into space, protecting us from the damaging UV rays. The international banning of ozone-destroying oxidizing chemicals like CFC's (chlorofluorocarbons) has helped to reduce the loss of protective ozone. Even so, these ozone-destroying compounds are still in the stratosphere where they slowly break down over time. As such, years with large ozone holes are now more associated with very cold winters over Antarctica and high polar winds that prevent the mixing of ozone-rich air outside of the polar circulation with the ozone-depleted air inside, the scientists say.

This year, for the first time scientists also found a depletion of ozone above the Arctic that resembled its South Pole counterpart. "For the first time, sufficient loss occurred to reasonably be described as an Arctic ozone hole," the researchers wrote in an article released Oct. 2 by the journal Nature. [North vs. South Poles: 10 Wild Differences]

On Oct. 27, 2011, the NASA NPP satellite will launch, carrying its Ozone Mapper Profiler Suite (OMPS). The advanced sensors on OMPS are expected to provide more accurate measurements of the total area of the ozone hole while also measuring how the concentration of ozone changes vertically throughout the atmosphere.