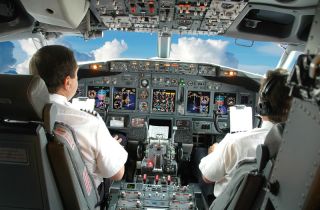 Politeness can do more harm than good in high-stakes situations, such as when a pilot is flying a plane in an emergency.
(Image: © a href=http://www.shutterstock.com/gallery-73309p1.html> Carlos E. Santa Maria | Shutterstock )

Politeness has a place, but not in high-stakes situations, according to researchers.

Whether a pilot is making an emergency flight or a doctor is trying to help a patient make a surgical decision, the sort of vague, evasive responses that help us avoid hurting someone's feelings can have disastrous consequences, according to a team of scientists, including Jean-François Bonnefon and Wim de Neys of the National Center for Scientific Research and the University of Toulouse in France, and Aidan Feeney of Queen's University in the United Kingdom.

The more sensitive an issue, the more polite we tend to become, according to the researchers. [10 Most Destructive Human Behaviors]

But, because it can require us to become evasive and vague, politeness can have a downside: It can lead to uncertainty about what the polite person is actually saying. As a result, we have to spend more mental resources trying to parse the actual meaning, the researchers write in their review of past studies on politeness in the October issue of the journal Current Directions in Psychological Science.

This can have negative consequences for safety and security in high-stakes situations. The authors note a chapter in Malcolm Gladwell's book "Outliers: The Story of Sucess" (Little, Brown and Co., 2008) devoted to the idea that politeness crashes planes, because crew members sacrifice clarity for politeness. In one of his examples, a first officer attempts to tell the captain about a dangerous amount of ice on the aircraft's wings, "Look how the ice is just hanging on his, ah, back there, see that?" the officer reportedly said, followed by a second and third attempt that are just as unclear and polite. By this time, the plane is about to take off and will crash a short while later, the researchers write.

Of course, politeness can wreak havoc within corporate settings, when workers don't want to embarrass their bosses or co-workers.

There are solutions, including assertiveness training — though it's not yet clear how well it works. It may also be possible to identify signals associated with politeness, such as tone, and train people to react to them as warning signs, according to Bonnefon.