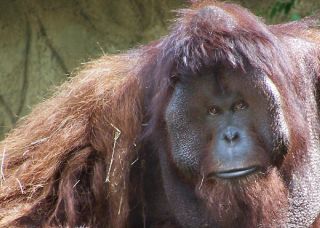 Doc, a 27-year-old orangutan and beloved resident of the Houston Zoo, was euthanized after a battle with heart disease, a serious problem among great apes in zoos. Doc was known as a gentle father and talented artist.
(Image: © Houston Zoo)

Animals in zoos do not face the stresses and dangers of the wild. As a result, some fall victim to aging and illness. In these situations, caretakers must sometimes make a difficult decision and decide when an animal is suffering too much. Doc, a 27-year-old orangutan and beloved resident of the Houston Zoo, was euthanized on Aug. 30, after a battle with heart disease, a serious problem among great apes in zoos.

Doc was known to staff and visitors as a gentle father. He and his son Solaris would play wrestle for hours in the orangutan habitat at Wortham World of Primates. After a rest, Solaris would get up, pull on Doc’s hair to initiate an invitation to continue and the game would begin again.

One of Doc’s most distinguishing features was his beautiful eyes. After meeting Doc, artist Tom Crockford created this representation of Doc’s gentle gaze.

An untitled work by Doc. His keepers at Wortham World of Primates described Doc’s technique as contemplative and distinguished by light small strokes, using plant leaves to apply non-toxic paint to the canvas. Doc’s works were determined and focused, showing his intelligent and gentle nature. Some of his work was sold to fund orangutan conservation.

Maggie, a 17-year-old fallow deer and long-time resident of the petting zoo at the Brevard Zoo, was euthanized after she became unable to hold food down. She lived beyond the typical life span for her species.

A fallow deer with familiar white dapples on her back, Maggie had lived at the Florida zoo since 1994, where staff and guests alike knew her for her calm, sweet nature and attraction to men wearing strong cologne.