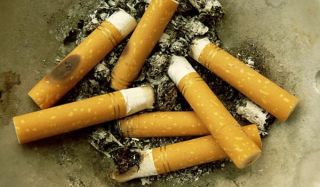 People who work in the mining industry are more likely to smoke than workers in any other industry in the U.S., according to a report released today (Sept. 29) by the Centers for Disease Control and Prevention (CDC).

The report estimated that 30 percent of mining workers smoke; the rate is 19.3 percent among all U.S. adults.

Workplace tobacco control interventions have been effective in reducing smoking rates, and because the decades-long decline in the U.S. smoking rate has slowed in recent years, the CDC analyzed data that broke down smoking rates by industry and occupation, the report said.

The second-highest rate was seen in people working in the accommodation and food services industry. They also had a smoking rate of 30 percent (the rate's range among mining industry workers extended higher, giving them a higher rank in the report). Those in construction had the third-highest rate, with 29.7 percent, the report said.

Workers in the education services industry had the lowest smoking rate, with 9.7 percent, the report said. The second-lowest rate, of 10.9 percent, was seen among workers in company management. [See the full list of smoking rates by industry.]

Employer interventions that are known to be effective in reducing smoking rates — such as health insurance coverage for cessation treatments, easily accessible help for those who want to quit and smoke-free workplace policies — should be strengthened, especially in workplaces with higher smoking rates, the CDC said.

The health care overhaul bill enacted last year requires new private health insurance plans to offer smoking cessation services without co-pays, and should result in higher quitting rates among working adults. Employers should make sure their employees are aware of these programs and encourage their use, the CDC said.

The report relied on data form the National Health Interview Survey for 2004 to 2010, a nationally representative sample of U.S. adults.

Pass it on: People working in mining, food services and construction have higher smoking rates than those in other industries.