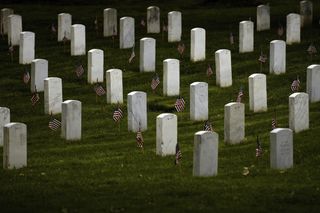 Flags mark graves at Arlington National Cemetery in Washington, D.C., for Memorial Day 2008. A November 2011 study finds that being reminded of the war dead may not always make people anti-war. Under some circumstances, casualties may make people more committed to the cause of combat.
(Image: © Adam Skoczylas, U.S. Army)

News of casualties in Iraq and Afghanistan would seem to lessen people's support for war. But a new study finds that highlighting lives lost can actually increase people's pro-war attitudes.

When people are forced to make decisions that involve throwing away previously invested resources, reminding them of how many soldiers have died in Iraq and Afghanistan actually makes them more likely to support continued fighting.

The reason seems to be a somewhat illogical way of thinking about "sunk costs," or costs you've already invested in something. For example, if you pay a nonrefundable membership fee to a tennis club and then injure yourself, making play painful, the logical thing to do is to stop playing tennis: Your money is gone either way, and you're not having fun on the court. But studies have shown that in situations like this, most people will insist they'd keep playing. The thought of "wasting" the membership fee is even more painful than the sports injury.

Likewise, pulling out of a war can be seen as wasting the lives of dead soldiers, said study researcher Alan Lambert, a psychologist at the University of Washington, St. Louis.

“The troops are dead and we can’t get them back, but people still have this sense that they should continue their investment in the war to justify their deaths," Lambert said in a statement.

Typically, researchers have assumed that casualties lessen a nation's support for war. Any speculations to the contrary have been anecdotal.

Lambert took the problem to the lab, where he ran two studies, one in 2007 regarding the Iraq war and one in 2009 dealing with the Afghan conflict. In both cases, study participants first were given a set of three problems to solve. Half of the group got problems having to do with sunk costs. For example, they'd be told to imagine that they had ordered expensive lobster at a restaurant only to learn they didn't like it. Their money gone, should they give up and scrounge for leftovers at home or stay at the restaurant to finish their unappealing meal?

Next, each person read a fake newspaper article, either about the weather or about the casualty rates of the Iraq or Afghanistan war. Then they read a series of statements about the war such as "The invasion of Iraq was a war of necessity," and rated how closely they agreed with each statement. Eighty-four people participated in the first study on Iraq, and 131 participated in the later Afghanistan war study.

In both studies, the result was the same: People primed to think about whether or not to "waste" resources they'd already spent became more positive about the war at hand after reading about casualties.

"The study shows that you can experimentally manipulate the salience of the don't-waste goal and if it's active in one context, choosing whether to eat the lobster, it also carries over into a completely different one — people's appraisal of whether they want to commit to the Iraq or Afghan wars," Lambert said.

The findings shouldn't be taken to mean that dead soldiers always increase support for war, Lambert and his colleagues report in the November 2011 issue of the Journal of Experimental Social Psychology. But they do suggest that judgments about sunk costs can sway pro-war attitudes.

"I think in some way, you have to get people to look forward and make them aware that sunk cost is a gut feeling," Lambert said. "You can either train them to not have the feeling that they're wasting resources or need to recoup their investment, or train them to not pay attention to the feeling. Our next direction may very well be the search for the antidote."