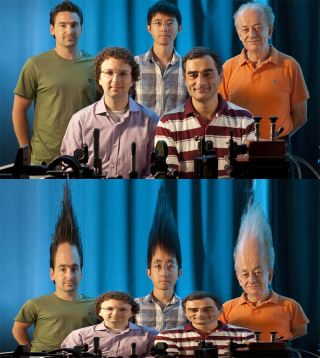 Top, clockwise from left: Patrice Genevet, Nanfang Yu, Federico Capasso, Zeno Gaburro, and Mikhail A. Kats. Bottom: A simulation of the image that would appear in a large mirror patterned with the team's new phase mirror technology.
(Image: © Eliza Grinnell and Nanfang Yu)

In a mind-bending, and light-bending, discovery, scientists have produced a fun-house-like warping of light that defies existing laws of physics.

For centuries, simple equations (taught every year to high-school physics students) have described how light moves through different media, for example from air into glass. Now, however, researchers have found that if the boundary between media is sufficiently complex (in this case, coated with nano-sized wires), those laws no longer apply.

The discovery has prompted the physicists to rewrite the traditional equations to account for the characteristics of the boundary surface. In most cases where these tweaked equations are applied, the new laws simplify back to their traditional forms, but sometimes, they show that light can behave in incredibly strange ways.

"Using designer surfaces, we've created the effects of a fun-house mirror on a flat plane," researcher Federico Capasso of the Harvard School of Engineering and Applied Sciences said in a statement. "Our discovery carries optics into new territory and opens the door to exciting developments in photonics technology."

In addition to stirring up the laws of physics, the new finding allowed the researchers to create some wacky pictures. For instance, they simulated an image of their lab group as it would appear in a mirror coated with nano-wires. The result: a portrait of conehead-looking scientists. [See images]

While Einstein's theory of special relativity showed that the speed of light represents a universal speed limit, it doesn't mean that light can't travel at different rates in different materials. For example, when light travels through a medium like glass or water, it travels slower than when moving through a vacuum (that's when it moves at the characteristic "speed of light" — about 671 million miles per hour, or 1,080 million kilometers per hour).

The traditional physics laws describe how moving from one medium to another causes light to refract, or change direction. These laws ignored the boundary between the two media, because that boundary didn't seem to change how the light moved.

But in a recent experiment at Capasso's lab, the researchers showed that when the boundary contains a special pattern, in this case an array of tiny gold antennas, etched into the surface of silicon, those laws no longer apply.

The scientists found that the antennas temporarily trapped the light, holding its energy for a short time before releasing it. By patterning the boundary with different types of these antennas, the researchers could bend the light before it even entered the silicon. Depending on the pattern, the light would reflect and refract in bizarre ways.

"Ordinarily, a surface like the surface of a pond is simply a geometric boundary between two media, air and water," said study leader Nanfang Yu, a research associate in Capasso's lab. "But now, in this special case, the boundary becomes an active interface that can bend the light by itself."

After their experiments, the physicists went back to the drawing board to reformulate the traditional light equations. They added new terms to the equations representing the effect of the boundary between two media to account for their findings.

"By incorporating a gradient of phase discontinuities across the interface, the laws of reflection and refraction become designer laws, and a panoply of new phenomena appear," said Zeno Gaburro, a visiting scholar in Capasso's lab. "The reflected beam can bounce backward instead of forward. You can create negative refraction."

Ultimately, the scientists found that manipulating the boundary can change the color (frequency of light waves), brightness (amplitude), and polarization of the light to create custom-made wacky light beams. One such beam the team succeeded in making produced a corkscrew-shaped stream of light from a flat surface.

The researchers say their finding could lead to a variety of applications in making lenses and optics. They report their discovery in the Sept. 2 issue of the journal Science.