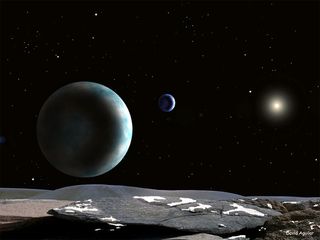 Artist's impression of Pluto and Charon as seen from one of Pluto's other moons.
(Image: © David Aguilar/Center for Astrophysics)

Five years ago today, the solar system lost a planet.

On Aug. 24, 2006, Pluto — which had been known as the ninth planet since its 1930 discovery — was demoted to the newly created category of "dwarf planet."

The decision was controversial, rankling some scientists who disagreed with the reasoning behind it. It also upset and confused many laypeople, who had regarded the nine planets as permanent fixtures in the sky — key touchstones for their understanding of the cosmos, and their place in it.

But Pluto's reclassification shows that our knowledge of the world around us is always changing, that scientific truths aren't handed down from on high. And that reminder may be the greatest legacy of the longstanding debate about Pluto's planet status.

"This debate shows people, especially kids, that science is always evolving, and it's exciting," said planetary scientist Scott Sheppard of the Carnegie Institution of Washington, who hunts for faraway dwarf planets. "And you should get involved in science, because there's a lot more to learn out there." [Photos of Pluto and Its Moons]

Pluto is not alone

When Pluto was discovered in 1930, it was viewed as an oddball, and that perception stuck for the next six decades.

Pluto, after all, is much smaller than the eight "traditional" planets, and its highly elliptical orbit is considerably out of whack with theirs. Pluto is also much farther away, zooming around the sun at an average distance of 3.65 billion miles (5.87 billion kilometers). [Infographic: Pluto, A Dwarf Planet Oddity]

But in the 1990s, astronomers started realizing that Pluto isn't such an oddball after all. They began finding many other large objects in Pluto's domain, the ring of icy bodies beyond Neptune known as the Kuiper Belt.

The new discoveries prompted some scientists to re-examine their basic understanding of the solar system's structure, including the way they'd classified its large objects. Just what should we call these icy, faraway bodies? If Pluto is a planet, then should they all be planets, too?

This rethink really got a jump-start in 2005, when Caltech astronomer Mike Brown announced the discovery of Eris, a Kuiper Belt object that seemed to be even larger than Pluto. And shortly thereafter, the International Astronomical Union (IAU) stepped in.

In 2006, the IAU came up with the following official definition of "planet": A body that circles the sun without being some other object's satellite, is large enough to be rounded by its own gravity (but not so big that it begins to undergo nuclear fusion, like a star) and has "cleared its neighborhood" of most other orbiting bodies.

Since Pluto shares the Kuiper Belt with lots of other big objects, it failed to meet the third criterion and didn't make the cut. Instead, the IAU rebranded Pluto and Eris as "dwarf planets." [Meet the Solar System's Dwarf Planets]

Some planetary scientists generally agreed with the new classification, saying that Pluto, Eris and other big Kuiper Belt bodies don't belong in the same category as the eight "original" planets. The faraway icy objects, they say, are just too different — in their sizes, compositions, orbits and evolutionary histories.

"It's classification that matters. Classification is the first step toward understanding," Brown told SPACE.com. "If you mess up the most basic classification of the whole solar system by not noticing the difference between the eight large planets and everything else — if you miss that, you've kind of missed the solar system."

Further, the word "planet" is so fundamental, and so central to any attempt to teach the public about the solar system, that defining it properly is crucial, Brown added.

"If you said that there are eight planets and then a kajillion dwarf planets, that's a pretty good description of what the solar system's actually like," Brown said. "If you said, 'Wow, we've got this planetary system and there are 20,000 planets. Oh yeah, and eight of them are significantly bigger than all the rest of them' — it's not a very useful classification."

Other scientists, however, aren't at all happy with the IAU's planet definition, calling it flawed and unscientific.

"I think the IAU really embarrassed themselves with this," said Alan Stern of the Southwest Research Institute in Boulder, Colo. Stern leads NASA's New Horizons mission, which is sending a spacecraft to study Pluto up close. "They created a problem for themselves and for astronomy. It [the definition] created an unworkable algorithm for deciding what's a planet and what's not." [Cosmic Definitions: What Is a Planet?]

Stern particularly objects to the "clearing your neighborhood" criterion.

"In no other branch of science am I familiar with something that absurd," Stern told SPACE.com. "A river is a river, independent of whether there are other rivers nearby. In science, we call things what they are based on their attributes, not what they're next to."

Further, Stern said, the criterion sets different standards for planethood at different distances from the sun. That's because the farther away a planet is from the sun, the bigger it needs to be to clear its zone. If Earth circled the sun in Pluto's orbit, for example, it wouldn't qualify for planethood in the IAU's eyes.

"I would say any definition that produces a result where Earth is not a planet under any circumstance is immediately indicted as ridiculous, because one thing we all agree is a planet is planet Earth," Stern said.

Stern doesn't have a problem with the term "dwarf planet." He just thinks dwarfs should be deemed "true" planets like the terrestrial planets and gas giants. Excluding the dwarfs from the official list amounts to an effort to keep the number of planets down to a manageable size, Stern added.

"That's not a very scientific way of going about it, since we have countless numbers of stars, galaxies, asteroids and everything else," Stern said.

A better understanding of the solar system

While scientists such as Brown and Stern may differ on the question of Pluto's planethood, they agree that the last two decades have brought about a sea change in our understanding of the solar system.

For example, we now know that the solar system's frigid outer reaches are packed full of big, interesting objects. The first big Kuiper Belt body other than Pluto was discovered just in 1992, but Brown said up to 2,000 or so dwarf planets might actually exist out there.

And many more big objects may lurk even farther away. Right now, astronomers know of one mysterious probable dwarf planet, called Sedna, from the region beyond the Kuiper Belt. But that distant zone — which is very difficult to survey with today's instruments — may harbor up to 20,000 dwarf planets, Brown said.

So Pluto is now known to be just one of many big, icy and quite diverse bodies orbiting the sun from far away.

"We have gone from nearly complete ignorance about these sorts of bodies to an incredible richness, and trying to understand how they function as little worlds of their own," Brown said.

Stern voiced similar sentiments, stressing that recent finds are showing planets — dwarf and otherwise, in our solar system and beyond — are fantastically diverse.

"That's what we're finding in planetary science, as a result of not just the Kuiper Belt but also discoveries about extrasolar planets," Stern said. "There are planets that have densities like balsa wood, and planets that are darker than coal, and hot Jupiters and super-Earths. I suspect we're just scratching the surface of the diversity — both in the Kuiper Belt and around other stars."

The debate over Pluto's planethood is a result of this vast increase in knowledge, this revolution in how we view our cosmic neighborhood. And it serves as a reminder that science is not an ironclad set of facts but rather a process, a way to learn as much as possible about ourselves and our surroundings.

"It shows that we're constantly expanding our knowledge of the solar system and our place in the universe," Sheppard told SPACE.com. "Science is always evolving, and we're always discovering new things."