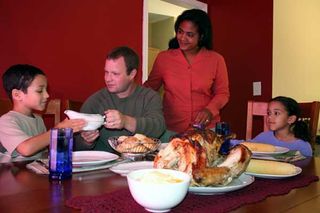 Continuing a growing trend over the past several decades, a new poll shows that most Americans want smaller families. Fifty-eight percent of Americans are now saying that smaller families with no more than two children are the ideal; this number is up from a low of 17 percent in the 1960s.

This slide could be influencing the national birth rate, which has been dropping for years. Between 2007 and 2009, the birth rate dropped more than 4 percent, a finding some researchers attribute to the ongoing recession.

The number of American adults who believe three or more children is the ideal (33 percent) is at its lowest point since 1996, when 32 percent said the same. At its highest, in the 1940s after World War II, about 77 percent of Americans preferred three or more children. These ideals started to change in the late '60s, when fears of overpopulation began and new lifestyle choices for women started to take hold, including the options of marrying later and working outside of the home full-time, Gallup researchers say.

There were no differences between different generations, or between men and women's desires in the poll, but the data did show different responses based on socioeconomic and political factors. Adults who want smaller families are likely to earn more than $75,000 per year per household, while adults in lower-income households want larger families.

While the majority of any political subsector favored small families, about 66 percent of Democrats believe that smaller families are best, while only 50 percent of Republicans do, suggesting, the researchers say, that conservative-leaning adults are more likely to have more children.

Gallup conducted the poll during June 2011, asking a random sample of 1,020 adults about their family size preferences. The data was published on their website on June 30.