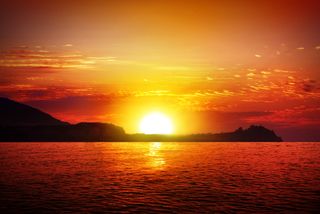 The first day of summer may not be the hottest, but the sun will be up in the sky for a fraction of a second longer than the day prior and the day after.
(Image: © © Cjwhitewine | Dreamstime.com)

The steamy temperatures would make it seem summer had already begun, but according to the astronomical calendar summer officially begins Tuesday.

The summer solstice occurs at 1:16 p.m. EDT (17:16 UTC), when the sun will be as high in the sky as possible, and it will be up a fraction of a second longer than the day prior or the day after. Though it's the longest day of the year in the Northern Hemisphere, the length of the full day, including night, doesn't change, of course.

Here's how it works: Earth is tilted on its axis 23.5 degrees, so it leans one way as it spins around its axis while orbiting the sun. On June 21 this year (some years it's June 20), the North Pole is pointing toward the sun as much as is possible. (The winter solstice occurs when the top half of our planet, everything north of the equator, faces directly away from the sun, leaving the North Pole in complete darkness.)

Tuesday may mark the sun's peak, but it doesn't typically mark summer's peak heat. That's because the oceans take time to heat up (or cool down). By mid-June the oceans of the Northern Hemisphere are still cool from winter's chill, delaying the peak air temperatures by a month and a half, according to NASA. [Image Gallery: Sunrise and Sunsets]

Earth is actually farther away from the sun during the summer than it is during the winter months, because our planet's orbit is elliptical, a squished circle of sorts. The difference is about 3 million miles (5 million kilometers), and it makes a difference in radiant heat received by the entire Earth of nearly 7 percent. But the difference is more than made up for by the longer days in the Northern Hemisphere summer with the sun higher in the sky.

If you're a night owl, not to worry. Days may be longest during the summer, but nights aren’t at their shortest. Before sunrise and after sunset some light gets scattered over the horizon by the atmosphere. This light, called twilight, lasts longest during this time of year.

There are three types of twilight:

And once the sun is more than 18 degrees below the horizon, the sky is dark enough to view the stars. Some places at high altitude don't experience all flavors of twilight. Saint Petersburg, Russia, is famous for its "white nights," when civil twilight reigns over the summer.