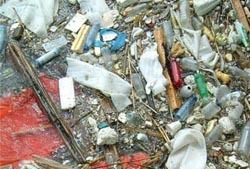 Once thrown out, biodegradable products — everything from trash bags and diaper liners to pens — are designed to break down relatively quickly and disappear into the natural environment. But these products may not live up to their green image, new research indicates.

"The implication is, it's biodegradable, therefore, it's better for the environment  —  and our point is: Well, not necessarily and not so fast," said study researcher Morton Barlaz, who heads North Carolina State University’s Department of Civil, Construction, and Environmental Engineering.

These biodegradable products release a potent greenhouse gas, methane, as they break down in landfills, a problem aggravated by the relatively rapid rate at which they decompose.

Barlaz and colleagues looked at what happened when food waste, office paper, newsprint, municipal solid waste overall, and a biodegradable polymer called PHBO were buried in the average American landfill. Their modeling experiment showed that materials with higher rates of decomposition, like food waste and PHBO, ultimately emitted more methane into the atmosphere.

"The more slowly the gas is produced, the more of it gets collected" at the landfill, Barlaz said. "That is a function of how landfills operate. The collecting systems are generally installed after the waste is buried."

During the intervening time, usually about two years, the more rapid the decomposition, the more methane is released.

To improve the environmental benefit of biodegradable products, they should be designed to decompose more slowly, and more methane should be collected from landfills, he said. [10 Ways to Green Your Home]

Methane stays in the atmosphere for a much shorter period of time than another greenhouse gas,  carbon dioxide, but in the meantime it traps heat more effectively.

The research, led by James Levis, a doctoral student at North Carolina State University, appeared online May 27 in the journal Environmental Science & Technology.