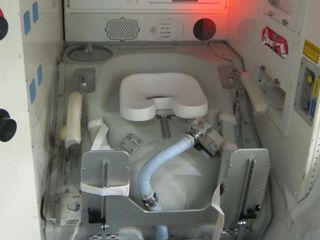 A mock-up of the bathroom on the space shuttle at Johnson Space Center in Texas.
(Image: © Stephanie Pappas)

"There's one chapter, ladies and gentleman, one chapter," Roach told an audience here at the University of Houston, Clear Lake, where she spoke on Friday (April 29) as part of the Space Center Lecture Series.

Roach is the author of "Packing for Mars: The Curious Science of Life in the Void" (W. W. Norton & Co., 2010). The book is about the human side of space travel, focusing on such questions as "What happens when astronauts don't shower for days?" "Are potential Mars explorers okay with drinking their own (filtered) urine?" and, of course, "How do you have a successful bowel movement in space?"

To Roach, there's a reason that elementary school kids on a field trip to a planetarium have wondered, if not voiced, that last question. The biological side of space doesn't fit nicely into a narrative of heroic, nearly super-human astronauts. But, Roach said, these dirty details are key to getting the public interested in space travel again.

"It's sort of the gateway drug," Roach said. "You talk about poop and they go, 'Oh, that's really interesting.'"

Bathroom details are a "microcosm" of the challenges humans face in getting to Mars -- or to an asteroid or wherever NASA's next mission may be, Roach said. In microgravity, everything from eating to eliminating has to be re-thought. During the first space missions, NASA was concerned that body odor and floating dandruff from un-showered astronauts would become intolerable on long-term missions. Part of the goal of Gemini VII, a two-week long orbital mission in 1965, was to find out if space travel was going to run into a hygiene barrier, Roach said. [10 Things You Didn't Know About You]

When she asked Jim Lovell, one of the astronauts on that mission and the later commander of the famous Apollo 13 mission, how gross things got in the Gemini VII capsule, the astronaut responded like many of Roach's sources.

"He said, 'Mary, you're investigating a rather unusual aspect of space flight,'" Roach recalled.

An outsider's view of space

Her outsider's approach to space was a benefit, Roach said, as she was completely naïve at how many "no's" would be lobbed her way by NASA. No one wants to be responsible for bringing scandal to a government agency, Roach said, adding, "I, of course, wanted access to all the things that made NASA uncomfortable."

Roach said she hit dead ends trying to learn more about the psychological impacts of disasters in space. She also had no luck getting people to talk about how astronauts are selected. Some of her requests, she said, were a bit starry-eyed -- like when she asked if she could poke around the space shuttle right after landing. [NASA's Space Shuttle: Top to Bottom]

"They were like, 'No,'" Roach said, to laughter from the audience.

Researching the book took Roach from space newbie to full-on enthusiast, however. When asked her thoughts on whether NASA should send a manned mission to Mars, Roach said such a mission would go far to get the public excited about space science.

"I would love to see it happen," Roach said. " I get sort of choked up about it in a really dorky way."