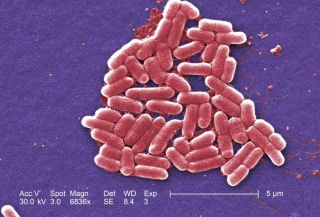 Colorized scanning electron micrograph depicting Escherichia coli bacteria, which recent research shows can breed in gravity 400,000 times stronger than that of Earth. Most E. coli strains are harmless, but the one here is O157:H7, which can cause severe illness in people.
(Image: © CDC/Janice Haney Carr)

If alien life is out there, it may be able to exploit more-extreme environments than scientists think, because huge gravitational forces don't seem to pose much of a problem for microbes.

Several different species of bacteria can survive and reproduce in "hypergravity" more than 400,000 times stronger than that of the Earth, a new study reports. The find suggests that alien life could take root in a wide range of conditions -- and that it could survive the high G-forces imposed by meteorite impacts and ejections, making the exchange of life between planets a distinct possibility.

"The number and types of environments that we now think life can inhabit in the universe has expanded because of our study," said lead author Shigeru Deguchi, of the Japan Agency of Marine-Earth Science and Technology in Yokosuka. [5 Bold Claims of Alien Life ]

Deguchi and his colleagues didn't set out to establish the high gravitational tolerances of microbes. Rather, they simply wanted to measure the density of Escherichia coli bacteria cells, using a centrifuge.

When they spun E. coli up to the equivalent of 7,500 G's (7,500 times the force of Earth gravity), however, they found that the microbe didn't miss a beat. It grew and reproduced just fine.

"The finding was a total surprise to us, and stimulated our curiosity very much," Deguchi told SPACE.com in an email interview."So we repeated [the] same experiments at higher G, and eventually found that E. coli proliferates even at 400,000 G, which was the highest gravity we could achieve by our instrument."

By contrast, anything above about 50 G's invites serious injury or death in humans, even if the exposure is for just a few hundredths of a second. Astronauts aboard NASA's space shuttle experience up to around 3 G's on liftoff and re-entry.

The researchers expanded their experiment, exposing four other microbe species to hypergravity for up to 140 hours. They found that another bacterium, Paracoccus denitrificans, can also reproduce at about 400,000 G's, though its proliferation -- like that of E. coli -- is stunted in such extreme conditions.

P. denitrificans and E. coli were the hypergravity-tolerance champs, but all five examined species could reproduce to some extent up to about 20,000 G's.

Deguchi and his colleagues report their results today (April 25) in the journal Proceedings of the National Academy of Sciences (PNAS).

A wide range of habitats?

While previous studies had demonstrated that some microorganisms can survive gravity exceeding 15,000 G's, the new research breaks ground by showing that a variety of microbes can actually proliferate in hypergravity.

The only comparable study the researchers are aware of found that E. coli can grow at 100,000 G's. Deguchi says that paper, published in 1963, didn't attract much notice because it was ahead of its time.

"The paper was published two years before microorganisms thriving extreme conditions were widely recognized by the discovery of thermophilic microorganisms in Yellowstone National Park in 1965," Deguchi said. [Extremophiles: The World's Weirdest Life]

The new study suggests that a wider variety of alien habitats may be open to life than scientists had imagined. The results even extend the possibility of life beyond planets, to the strange "failed stars" known as brown dwarfs, researchers said.

After all, if Earth bacteria can breed in 400,000 G's, the 10-to-100 G's possibly found on a brown dwarf shouldn't be much of an impediment. And some brown dwarfs may be cool enough to support life as we know it, researchers said.

The results also suggest that the transport of viable lifeforms between worlds is a real possibility, researchers said.

Over the ages, Earth has been showered with perhaps 1 billion tons of Mars rocks, which were liberated from the Red Planet via meteorite strikes. Such interplanetary exchanges, in our solar system or others, could theoretically transfer microbes as well -- an aspect of the "panspermia" hypothesis, which posits that the seeds of life are everywhere and hopscotch from world to world.

Scientists think meteorite-caused rock ejections can generate up to 300,000 G's, researchers said. The new study indicates that microbial life could survive those conditions and keep right on breeding.

"If life does exist in other places in the universe, our study provides further evidence that it could spread within solar systems by the mechanism often discussed in panspermia hypotheses -- i.e., impact-based transport of meteorites between bodies of the same solar system," Deguchi said.