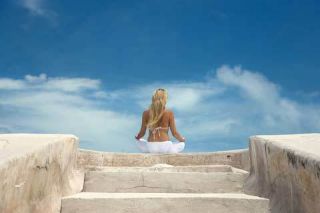 Is that pain really all in your head? Maybe about half of it is, according to a new study on meditation and pain relief.

Study volunteers were subjected to a pain test before and after 80 minutes' worth of meditation training. After meditating, they reported that the same pain was 40 percent less intense and 57 percent less unpleasant. Brain scans using magnetic resonance imaging (MRI) of pain-reception regions revealed significant changes before and after meditation, too. [Related: Meditation Dulls Experience of Pain]

These results, appearing in the April 6 issue of the Journal of Neuroscience, imply that meditation could be more effective than many drug-based pain relievers for certain kinds of pain management.

What's novel about this study is the revelation that ordinary subjects could be trained in meditation so quickly, in just four 20-minute classes. "You don't have to join a monastery," said Fadel Zeidan of Wake Forest Baptist Medical Center in Winston-Salem, N.C., who led the study.

The only significant study limitation was the small sample size: just 15 participants.

No pain, no feign

For this study, healthy volunteers who had never meditated were placed under an MRI scanner. Then a "pain-inducing heat device" heated a patch of skin on their legs to 120 degrees Fahrenheit (49 degrees Celsius) for five minutes. Anything for science, after all.

The volunteers ranked the pain using a common, subjective pain-scale rating system, and the MRI scan captured brain activity in the regions associated with pain.

Next, the volunteers learned a meditation technique called focused attention, where one is taught to attend to the breath and let go of distracting thoughts and emotions. Then they set themselves up to get burned again. [Why Meditation Works]

The pain that the volunteers reported while meditating in the presence of the same noxious stimulation was, on average, about half of what they had reported in their pre-meditative state. This is both in pain intensity and unpleasantness, the latter being an emotional measure reflecting the desire to escape the pain.

The MRI scans revealed that the volunteers weren't feigning their subjective reporting. Brain regions associated with reframing, or masking, pain were more active during and after meditation, corresponding to verbal reports of pain reduction.

The study's press release and subsequent news reports state that meditation is nearly twice as good as morphine or other pain-relieving drugs at reducing pain. This isn't entirely accurate, and in fact "morphine" isn't mentioned in the study itself.

At issue is that in similar pain studies, unrelated to the Wake Forest work and conducted many years ago, pain-relieving drugs such as morphine typically have reduced pain ratings by only 25 percent. Anyone who has ever had to take morphine or a serious prescription pain reliever knows that close to 100 percent of the pain goes away.

Morphine remains quite effective in reducing agonizing pain; it is less effective, perhaps, at reducing pain from a hot blade on the leg.

The Wake Forest study, at its best, shows how meditation should be seriously considered as a complement to other forms of pain management, even for chronic pain. Meditation has many positive aspects: It's free; it's non-addictive and devoid of side effects; the Wake Forest study shows that it can be taught quickly; and Zeidan said that it can have lasting effects, even when a person isn't meditating.

Those who meditate in general can learn how to better manage pain by "reframing it," Zeidan said, which means to accept and refocus the pain, "to let it go, so that it doesn't consume you."

Zeidan tried meditation himself after his appendectomy.  Did it work?  "Oh, yeah," he said.