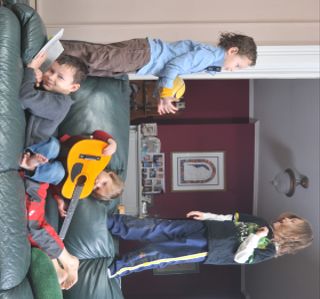 With four boys, the Gilboa family of Boston has to schedule their time wisely. So Ari, 8, (with book), Nadav, 6, (standing on the back of the couch), Oren, 4 (holding ball) and Gavri, 2 1/2 (with guitar), are limited to two extracurricular activities apiece.
(Image: © Deborah Gilboa)

Nick Nunley spent his childhood years on the go. It started with hockey in first grade, and later expanded to other sports, including baseball, cross country, basketball and golf. Now a senior in high school in Illinois, Nunley focuses on hockey and golf, sometimes playing on two or three hockey teams in one season. He also heads the school's law club. Most weeks, Nunley said, he spends 15 or 20 hours participating in extracurricular activities.

In some circles, a schedule like Nunley's is a cause for concern: Could he be doing too much, overscheduling himself to the point of stress? Authors of books, such as "The Over-Scheduled Child: Avoiding the Hyper-Parenting Trap" (St. Martin's Griffin, 2001), have worried that parents and kids are becoming frazzled and anxious in the face of constant activities. The image of the overstructured child with no time to play is a common media refrain.

But Nunley and his mother Vanessa, who blogs at moreismoremom.wordpress.com, say they're happy with the schedule they set. Trips to practices and games were "some of the best moments of our family life," Vanessa Nunley told LiveScience. And for Nick, who is headed to college in Indiana next fall, it's the downtime that's no fun.

"My hockey career just ended and it's not quite golf season yet, so I'm a little bored not having things to do all the time," Nick Nunley told LiveScience. [Sidebar: Parent and Expert Tips for Juggling Busy Kids]

Despite fears of overscheduling, new research suggests that busy kids like Nick may not have much to worry about. While it's true that the benefits of involvement in activities decrease when kids are extremely busy, only a small number of children and teens take part in that many extracurricular activities. Far more kids take part in no structured activities outside of school at all, said Jennifer Fredricks, who presented research on overscheduling March 31 at a meeting of the Society for Research in Child Development (SRCD) in Montreal.

Nationwide, being busy is not an epidemic. In 2006, SRCD published a report finding that kids spent on average just five hours in structured activities (besides school) each week. Just 3 percent to 6 percent spend more than 20 hours a week in extracurricular activities.

"It's a community that has a voice," Amy Bohnert, a psychologist at Loyola University in Chicago, said of the small percentage of kids who do struggle with taking on too much. "[Overscheduling] is real for certain people, but it's not the reality of most people in this country." (Bohnert was not involved in the SRCD report.)

Fredricks found similar results. Using data from a nationally representative sample of 10th-graders, she found an average extracurricular participation rate of five hours a week. Just 7 percent of kids participated in 10 or more activities a week, while about 3 percent spend more than 20 hours each week in structured activities. On the other side of the coin, one-third of kids do not participate in after-school activities at all.

Andrea Mata, a graduate student at Kent State University in Ohio, found similarly low levels of overscheduling in a sample of elementary school students. The most heavily scheduled kindergarteners spent an average of just over two hours a week in structured activities, Mata reported at the March 31 meeting, and fifth-graders spent about four hours in those activities.

Where has all the playtime gone?

That's not to say the hypothesis of overscheduling comes out of nowhere. Free playtime is decreasing in the United States, according to Laura Berk, an emeritus professor of psychology at Illinois State University. There are a number of factors eating into that time, Berk told LiveScience: More extracurricular activity opportunities, leisure time spent on television and the computer, and academic pressure from schools.

"Seven percent of U.S. schools no longer provide any recess to students as young as second grade," Berk said.

"It is a substantial problem," Berk said. "Play has receded considerably in children's lives."

Meanwhile, those kids who do participate in lots of activities can start seeing diminishing returns, a phenomenon called the "threshold effect," according to some studies. Fredricks found that the benefits of participation begin to level off at about five to seven activities.

Mata failed to find similar results in elementary school children. When she measured behavior problems in sixth-graders, she found no differences in aggression, delinquency, anxiety or depression based on their patterns of extracurricular participation. However, 15-year-olds who took on more and more activities over time scored higher on anxiety than kids who had always been extra-involved. That could be because the historically highly involved kids are used to juggling lots of activities, while the newbies have to adapt as they take on more, Mata said.

Socioeconomic class plays a role. Middle- and upper-class kids do benefit from structured activities, Fredricks said, but lower-income kids get a relatively larger boost. However, low-income kids have fewer opportunities to participate, she said, which is likely to get worse thanks to ongoing budget cuts.

"If they lose [structured activities] at school, they don't necessarily have it in the community," Fredricks said of low-income children, adding that she was "scared" of the current budget-slashing environment.

The take-away for parents, Mata said, is to find a balance. Figuring out what works for the individual child is key.

"Structured activities lead to beneficial outcomes, but at the same time, parents need to pay attention to what their child can handle," she said.

Practical limitations can play a role in the decision as well. Deborah Gilboa, a Boston family medicine doctor and mother of four who consults at deborahgilboamd.com, values family time, and she and her husband prefer not to spend their free time shuttling their kids from lesson to lesson. So they limit their four sons to two activities at any given time. The kids can sneak in extra activities, but only if it's something most of the family can do together. Right now, Gilboa said, her husband and three of her sons take karate, combining family time with structured time.