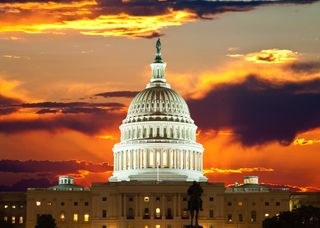 Once again, congressional Democrats and Republicans cannot agree on a budget bill, and the result could be a shutdown of the U.S. federal government. Similar situations occurred in 2011 and earlier this year, when budget cuts related to sequestration took hold.

Since 1977, there have been 17 shutdowns, according to USA Today, most of which lasted no more than a day or two. "Unfortunately, we're getting familiar with dealing with this," Ted Davies, president of government contractor Unisys Federal Systems, told the Washington Post. "You do all the preparing you can."

The snag this time is the implementation of the Affordable Care Act (aka "Obamacare"), which was passed by Congress in 2010. Congressional Republicans — particularly in the House of Representatives — are attempting to defund or delay its implementation. If the two sides can't come to an agreement by Monday (Sept. 30) at midnight, a government shutdown will begin to take effect. [7 Great Congressional Dramas]

A complete government shutdown doesn't mean that all government employees will stop working. "Essential operations" — such as national security, law enforcement, criminal investigations, care of prisoners, air-traffic control and other transportation safety functions — will keep working during a shutdown.

So what might result from a shutdown this time? If history teaches any lessons, the shutdowns of the past may provide some guidance.

The U.S. Office of Management and Budget estimated that the first of those two shutdowns cost taxpayers an estimated $100 million per day. The final cost of the three-week shutdown, including back pay to employees who did not go to work during that time, was more than $1.25 billion. According to the Government Accountability Office, a funding gap of just three days in 1991 ran up a $607 million bill, including $363 million in lost revenue and fees.

And according to some estimates, there would be 800,000 to 1 million federal employees furloughed in the case of a shutdown this time. Those estimates do not include government contractors.

New patients were not accepted into clinical research at the National Institutes of Health (NIH) clinical center during past shutdowns, the Centers for Disease Control and Prevention (CDC) ceased disease surveillance, hotline calls to NIH concerning diseases were not answered, and toxic-waste cleanup work at 609 sites reportedly stopped, resulting in 2,400 Superfund workers being sent home.

This year, the U.S. Department of Health and Human Services said that a government shutdown could mean furloughing more than 40,000 staff, while retaining about 37,000, according to the Post. And while some agencies, including the Substance Abuse and Mental Health Services Administration, would have to furlough the majority of their staff, the CDC would continue "minimal support" to protect the health of U.S. citizens, though it would have a "significantly reduced capacity" to respond to disease outbreaks and would be unable to continue its annual flu program.

Additionally, the Food and Drug Administration would be forced to furlough about 45 percent of its workforce, according to the Post, and the agency would cease routine inspections, monitoring of imports and most laboratory research.

Ironically, Obamacare — the sticking point in the current budget debacle — will continue its rollout, despite Republican efforts to kill the program. The Affordable Care Act is a permanent entitlement that isn't subject to annual funding by Congress, according to USA Today, and all state-run health insurance exchanges will open as scheduled on Tuesday (Oct. 1).

U.S. Environmental Protection Agency Administrator Gina McCarthy told the Post that the agency would all but close in the event of a government shutdown, leaving just a handful of staff members available to "keep the lights on and respond in the event of a significant emergency."

Most of the Department of Energy's offices would close during a shutdown, except for those groups overseeing nuclear weapons and naval-reactor programs, and officials in charge of dams and electrical transmission lines around the country.

The Department of Interior — which oversees the National Park Service, the U.S. Geological Survey, the Fish and Wildlife Service, the Bureau of Indian Affairs and the Bureau of Land Management — would furlough about two-thirds of its staff, according to the Post. Closure of 368 National Park Service sites, including national monuments and national museums, would begin immediately. These closures would cause a significant loss of tourism revenue for local communities.

The National Science Foundation — which funds 2,000 research institutions, including astronomy observatories, and science and technology centers, as well as millions of dollars in research grants each year — was gravely affected during the last shutdown. Approximately $120 million in research grants went unmade during that time, delaying the support of approximately 2,000 people to carry out research and education activities.

Additionally, 240 grant proposals for science and engineering research and education went unprocessed each day of the shutdown, resulting in a backlog of 3,000 grant proposals, 1,000 of which would normally have been accepted. Dozens of panels, meetings and workshops were canceled.

This year, all Smithsonian Institution museums and zoos will be closed immediately if a shutdown takes place. Only personnel involved in "security, maintenance, and the [National] Zoo employees that are responsible for the care of the animals," will continue working, according to a spokeswoman for the Smithsonian, as quoted in the Post.

About 5,700 employees of the National Oceanic and Atmospheric Administration would remain on the job because their analysis and dissemination of weather data are considered necessary "to protect life and property," the Post reports.

Finally, the U.S. Patent and Trademark Office has about four weeks' worth of funds (partly from user fees) to continue operating, but once those funds run dry, the agency will be forced to close.

Last Friday (Sept. 27), the State Department reported that it still has some funds outside the annual congressional appropriation to continue functioning in the event of a government shutdown. "Consular operations domestically and overseas will remain 100 percent operational as long as there are sufficient fees to support operations," the State Department said in a statement.

In previous shutdowns, multiple services for veterans were curtailed, ranging from health and welfare to finance and travel.

Medical services offered by the U.S. Department of Veterans Affairs (VA) would not be affected by a shutdown, according to the Post, but benefits programs would probably be curtailed. VA offices handling disability claims would have limited services, the Veterans Benefits Administration would stop processing benefits and the Board of Veterans' Appeals would cease all hearings.

In previous shutdowns, delays occurred in the processing of applications by the Bureau of Alcohol, Tobacco, Firearms and Explosives; work on more than 3,500 bankruptcy cases reportedly was suspended; cancellation of the recruitment and testing of federal law enforcement officials reportedly occurred, including a halt to hiring 400 border-patrol agents; and delinquent child-support cases were delayed.

Many law-enforcement personnel are exempt from a shutdown, including employees of the Federal Bureau of Investigation; the Drug Enforcement Administration; the Bureau of Alcohol, Tobacco, Firearms and Explosives; federal prison staff; members of the U.S. Parole Commission; and U.S. attorneys across the country.