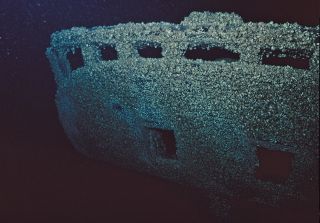 The stern of the shipwreck is covered with zebra mussels.
(Image: © Robert Underhill/Michigan Shipwreck Research Associates. )

Divers have announced the discovery of the wreck of a sailing ship that was lost 180 years ago when it sank in Lake Michigan.

The divers were looking for the remains of Northwest Airlines Flight 2501, which crashed into the lake in 1950, killing 58 people. What they found was a zebra mussel-covered vessel dating back to the 1830s, the Grand Rapids Press reported.

The 60-foot-long (18-meters) sloop was discovered by the Michigan Shipwreck Research Associates and members of the National Underwater and Marine Agency. [See other shipwrecks from the Great Lakes]

Not much is known about the shipwreck, except that it has been at the bottom of the lake for 180 years. It was found sitting upright about 250 feet (76 m) underwater.

The unknown shipwreck and others will be discussed on April 16 at the expedition team's annual show, "Mysteries and Histories Beneath the Inland Seas," in Holland, Mich.