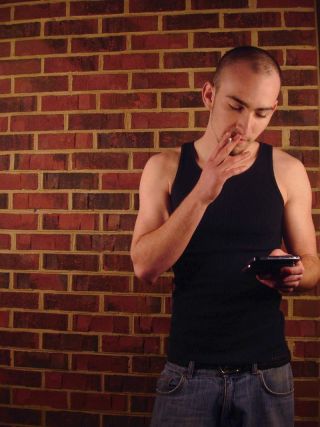 Lauren Cooper is attached at the hip to her iPhone – "Seriously, it's a problem," she says – so when she decided to track her diet and exercise, downloading an app made perfect sense. Cooper, a project manager in Columbia, S.C., now tabulates her Weight Watchers points using one app. Another app acts as a digital coach, urging her toward running a 5K.

"I sit at a computer all day, so the last thing I want to do when I get home is sit at a desk and enter what food and activity I've done for the day," Cooper told LiveScience. "Having it on my phone just makes it easier to remain accountable."

Cooper is one of thousands of smartphone users who use, or at least download, apps that aim to change health-related behaviors, from quitting smoking to climbing more stairs. The most popular source for apps, the iTunes app store, doesn't give out download information, but the top-rated free "weight loss" app in the Android Market, an exercise monitor called CardioTracker, has been installed on smartphones between 1 million and 5 million times.

But despite this popularity, there has been little research on how well apps work, or even if any comply with known public health guidelines on how to change people's behaviors. Early studies suggest that nearly all antismoking apps fail to connect users to proven methods that help people quit smoking. Weight-loss apps fare slightly better.

"We have within the field of public health what I like to refer to as 'tools versus toys,'" Erik Augustson, a psychologist in the tobacco control research branch of the National Cancer Institute (NCI), told LiveScience. "It's very easy to become enamored with whatever the latest technology is, without thinking about, 'Is this in fact a technology that can be leveraged to help with behavior change?'"

Public health researchers are optimistic that apps will be one of those technologies that prove helpful. As of September 2010, 28 percent of all cell phone users had a smartphone, according to a Nielson Company report. And the rate of smartphone adoption is increasing — even among lower-income groups that public health researchers often struggle to reach, Augustson said.

"The main advantage of what these new technologies are offering us is the ability to reach and potentially engage very, very large numbers of people, and people from really diverse backgrounds," he said.

The trick is figuring out whether apps are worth their salt. Noting the recent explosion in the number of smartphone and app-users, Abroms and her colleagues decided to find out what, exactly, users were getting for their download dollar. They searched the iTunes store for apps related to smoking cessation and found 47, ranging in price from free to $9.99. About one-third of the apps were calculators that tallied money saved or health benefits from quitting smoking. Another third were calendars that counted days until or days since a quit date. Other apps involved hypnosis, rationing of cigarettes and even "virtual cigarettes" to be used for pretend-smoking.

The researchers then compared the apps with the gold standard for antismoking programs that work: U.S. Public Health Service's 2008 Clinical Practice Guideline for Treating Tobacco Use and Dependence. They found that none of the apps met the recommendations, and few even got close. On average, the antismoking apps scored 7.8 out of a possible 60 points, the researchers reported in March in the American Journal of Preventive Medicine. Even worse, the hypnosis apps tended to be the most popular.

"Hypnosis is one of those therapies that people tend to like, but there's very little evidence that it works," Abroms said. "We were sort of troubled to see that what people were going for were kind of the unproven, the unrecommended therapies." [Read: True Cost of Smoking - $150 a Pack]

The smoking apps tended to fall short in connecting people with social support to help them quit, Abroms said. Only two apps mentioned cigarette "quitlines," phone counseling shown to help people resist temptation. None suggested one of the seven approved medications that help people quit. And none sent text-message reminders or alerts.

Abroms and her colleagues did a similar analysis of weight-loss apps, comparing them with Centers for Disease Control and Prevention guidelines. That research is not yet published, but Abroms said weight-loss apps fared slightly better at providing recommended methods of weight loss. Unlike with the smoking apps, people tended to prefer those with more science behind them, Abroms said.

Measuring success: Is there an app for that?

Meeting guidelines is one thing, but successfully changing behavior is another. There haven't been any studies of the efficacy of apps. That's mostly because the pace of academic research lags behind the pace of consumer technology, said Adam Kaufman, the president of DPS Health in Los Angeles, a company that contracts with insurance agencies and doctors' offices to develop support programs for patients.

"It takes three to six months to build these [apps]," Kaufman told LiveScience. "It takes six to 15 months minimum to run a study and it takes a year to publish a study, so if the first iPhone is two to three years old, you would just be seeing the first iPhone study. If you started a study a couple years ago, the Droid phones weren't even out." (The first iPhone was released in 2007, and the first Android phones came out in late 2008.)

App developers keep their own statistics, but it's tough to know how active consumers were before they downloaded a new weight-loss program. The MeYou Health app Monumental, which tracks users' stair-climbing and maps it onto virtual landmarks like the Eiffel Tower, has a return-user rate of about 30 percent, said company spokesperson Alicia Benjamin. (Collectively, Monumental users have climbed 397,000 stairs since the program was released in October 2010, she said.) But even if people drop one app, it's impossible to know if they've picked up another. Cooper, who now relies on the Weight Watchers and Couch to 5K programs, said she tried several diet and exercise apps before she settled on two that she likes.

Kaufman's company developed a Web tool called Virtual Lifestyle Management, designed to help people with diabetes or at risk for the disease track and improve their health. The program, which is based on National Institutes of Health guidelines, has been Web-based but is moving toward text and other mobile applications, Kaufman said.

"The real challenge in weight loss or any behavior change is not that initial period of high motivation," Kaufman said. "It's how do you extend that so it actually becomes a lasting change over time."

Unfortunately, Kaufman said, changing bad habits is hard work, which doesn't always mesh with the fun-and-games style of for-profit apps. Kaufman sees the most useful apps as the ones linked to real-world support, such as a clinician or dietician who reviews your exercise logs and then makes recommendations based on the information entered.

Abroms and Augustson see similar promise in apps' ability to connect people to the help they need. And the playing field is always changing: Since Abroms analyzed smoking apps and found them lacking, at least two that are based on proven public health guidelines have come on the market, Augustson said. One is QuitGuide, an app developed by the NCI (Augustson was involved in the development of that app). The second is The Ex Plan, developed by the nonprofit American Legacy Foundation. QuitGuide is free, while The Ex Plan costs 99 cents.

The NCI and other agencies are trying to keep up with the new technologies, Augustson said, developing a smoking-cessation text-messaging program for teens that should launch this summer.

"There is a very strong interest within the Department of Health and Human Services to find ways to use new technologies like mobile apps and also text messaging to improve people's health," he said.

Even with their growing reach, apps will never reach every person in need of public health advice, Augustson said. That means the technology will always be just one part of wider outreach efforts. And there is still a need for research on apps, Abroms said, especially studies on whether or not they really work.

"Just because something follows the guidelines doesn't mean it actually works," she said.