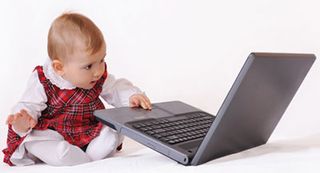 AUSTIN – The nerds, geeks and hipsters who helped build modern technology have done more than grow up over the last 20 years — they've started multiplying. Now, faced with the prospect of raising children in a world even more wired than theirs, a new breed of parents are redefining child rearing for an age of digitally native children.

Speaking at the South by Southwest music, film and interactive technology conference here, self-professed “geek dads” Dan Sinker and John Bracken led a room full of parents through some of the tough questions parents face regarding Facebook, Internet usage and how early to start teaching their kids programming.

“A lot of things are different now. The first time my baby gave me a kiss, it was over [Macbook’s video chat program] FaceTime,” Bracken said. “On the other hand, I think a lot of [parenting] was exactly the same as before.”

For parents who spend most of their day online themselves, limiting their children's time on digital devices while simultaneously giving them a head start on the computer skills needed to succeed in the new economy can turn into a vexing cross between the classic parenting problems of “do as I say, not as I do,” and forcing their child to practice the piano more.

The parents in the seminar (who asked not to be identified) agreed on many points, including the need to monitor their children's Facebook accounts, and snapping up online identities for their children as soon as possible. When one prospective father asked the group if he should register his daughter's name as a URL, a Twitter feed, a Facebook account and a Gmail address as soon as she is born, the entire group answered with a resounding “yes,” with many saying he shouldn't even wait for her birth.

“My son is 7, and he has a Twitter account. Just having that account lets us stay together, and it’s a fun thing to do as a family,” one mom said. “It’s important to introduce these things early, so they learn how to handle it. Also, I like that he has that competitive advantage, too.”

The main point of disagreement amongst the group arose over the issue of limiting TV time. Bracken, for instance, will not let his daughter watch TV, but has no problem showing her streaming Netflix shows on his iPad. Sinker agreed, noting the unlike regular TV, streaming media contains little or no commercials for unhealthy foods or products parents might find to be objectionable. Some in the audience did not agree with this explanation, however, and called Bracken's approach hypocritical.

With so many of the parents agreeing with Bracken and Sinker in regards to monitoring their children online and snapping up digital identities as soon as they pick their child's name, it took the lone child in the audience, an 18-year-old conference employee charged with monitoring the time of the meeting, to bring in a dissenting opinion.

“It might seem nice now, and it’s nice that you want to reserve their domain name and be so involved, but you have to understand that later in life they will want to build an identity,” the SXSW worker told the assembled parents. “Remember, your child might want to use that name for themselves.”