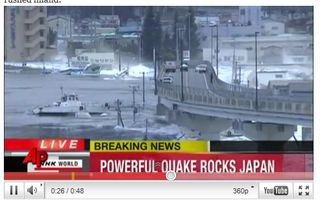 Japan's buildings may have mostly survived the massive 8.9 magnitude earthquake that struck last Friday, but thousands of people died because of the deadly tsunami that followed and swept away entire coastal towns. Now the Japanese have the chance to rebuild even stronger defenses to safeguard the lives of its citizens, experts say.

The country has one of the most sophisticated earthquake and tsunami warning systems in the world, as well as seawalls, fortlike floodgates and some tsunami shelters. Yet the devastating loss of life suggests that not enough tsunami shelters existed to give people safe haven above the waves – and those that exist don't follow any one standard.

"There are so many kinds of tsunami shelters in Japan," said Harry Yeh, a civil engineer at Oregon State University in Corvallis. "There is no standard design at all for evacuation buildings. That's the reason we cannot follow [for U.S. building shelters]."

More disaster was prevented because of Japan's stringent building code that requires new buildings to hold up against collapse during maximum-event earthquakes. The country also has thousands of seismic-protective systems to protect important buildings such as hospitals, along with some apartment and office buildings.

But many of the systems undergo less rigorous hazard analysis and testing compared to the systems in quake-prone California, according to Michael Constantinou, a civil engineer at the University of Buffalo in Buffalo, N.Y. Japanese systems are also designed for lower level earthquakes than their California counterparts, in part because of the choice of technology.

"Bridges in Japan are designed for higher earthquake hazards than the buildings next to them," Constantinou told InnovationNewsDaily. "This, in my opinion, is problematic."

Deadly lessons from the ocean

The main loss of life in Japan came from the tsunami spawned by the earthquake. Such tragedy occurred despite Japan having the best tsunami defenses in the world and a "very impressive" warning system, said Yeh at Oregon State University.

Yeh was watching a Japanese TV channel when he saw a tsunami warning pop up just five minutes after the earthquake. The first waves arrived 30 minutes after the earthquake, which left many coastal villagers without time to reach safety – if any higher ground or shelters existed nearby. Cities such as Tokyo fared better with their more extensive seawalls and floodgates.

Some Japanese tsunami shelters resemble towers, while others merely involve a platform sitting atop concrete pillars. But even that patchwork collection of shelters beats the total lack of tsunami shelters in the U.S.

Tsunami experts had previously scoffed at the idea of even building tsunami shelters – at least until the 2004 Indian Ocean Tsunami killed 230,000 people. That led to the realization that even educating people about fleeing the coast might not save their lives.

The first proposed U.S. tsunami shelter is designated to double as the town hall for Cannon Beach, Ore., but only if the town can find the funding. Yeh and his colleagues have been working on simulation models of the tsunami forces and evacuation procedures for such a shelter.

Steady on the shaking

Japan's bitter experience with tsunamis has naturally gone hand-in-hand with its history of earthquakes. The country went on a frenzy of quakeproofing following the 1995 Kobe earthquake that killed more than 6,400 people, and now has the largest array of such protective systems in the world.

"It's not something you can do overnight, but over last 15 years practically every important building in Japan has been fitted with these systems," Constantinou said. "Even in some apartment buildings, they proceeded with application of this technology."

The thousands of protective systems include so-called seismic isolators that protect a building similar to how shock absorbers cushion passengers in a car. In Japan, many buildings sit atop bearings which consist of stacked and bonded layers of rubber and steel. The rubber allows for horizontal stretching during a quake.

Still, such rubber-based systems can only stretch so far during the most massive earthquakes. California has favored so-called friction pendulum isolators that use a sliding, lubricated ball bearing trapped between steel plates to permit even greater stresses from quakes, but Japan has been slow to install such systems, Constantinou said.

Both Japan and California also use steel braces attached throughout a structure to dissipate some of the earthquake energy, as well as more advanced "viscous dampers" that resemble steel pistons.

California requires intensive surveys to figure out the site-specific seismic hazard for each building, whereas Japan uses a standard suite of recorded earthquake motions as a general rule for installing such systems – something that is "unacceptable" in California.

"Applications in Japan consider a lower level earthquake for the design, [because] the displacement capacity of the isolation systems is much less," Constantinou explained. "Also, review and plan-checking appear not as rigorous as in California."

Constantinou seemed certain that Japan would apply even more rigorous standards in the wake of its latest disaster. He also acknowledged the huge challenge Japan faced in the "one-two combination" of the earthquake and tsunami.

"This is really a catastrophe," Constantinou said. "But I think they did really well."