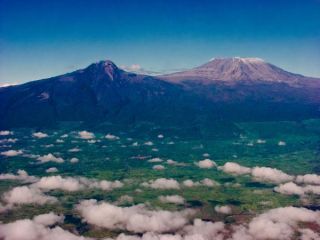 Deforestation around Africa's Mount Kilimanjaro may have as large of an impact on the mountain's local weather and climate as global climate change, according to researchers from the University of Alabama, Huntsville.

Udaysankar Nair, a research scientist at the university's Earth Sciences Center, and doctoral student Jonathan Fairman are using climate models and data from NASA satellites to create a local model that can predict the effects of deforestation on local weather patterns, including rainfall and snow cover.

In early work published last month in the Journal of Geophysical Research, the team studied the impact of deforestation for the month of July. They found that deforestation changed weather at the base of the mountain, but not at its peak.

Deforestation in July affected airflow — instead of flowing around the mountain, most of the air flowed over the top, which in turn, affected rainfall.

"When you deforest, you increase rainfall at elevations of 1,000 to 4,000 meters, but at the expense of a reduction of rainfall at lower elevations," Nair told OurAmazingPlanet.

Because they studied the mountain in the month of July — the dry season — it's unclear how deforestation would affect the peak of the mountain, where gradually disappearing glaciers reside, because there is no rain or snow at that time. So the researchers are now extending their study to look at the impacts of deforestation for the entire year, including the rainy seasons.

Nair and Fairman previously studied the impact of deforestation in the mountains around Monteverde, Costa Rica, which host exotic ecosystems known as cloud forests. The region has experienced significant ecological changes, including less rainfall, the reduction of cloud cover and the subsequent disappearance of several species of amphibians and birds.

While global climate change is certainly playing a role in those impacts, Nair and Fairman found that deforestation of the lowlands around the mountains is exacerbating that effect. They found that deforestation had the same effect as climate change — causing clouds to move up the slope of the mountain, increasing temperature and decreasing rainfall.

"What we're finding more and more is that [deforestation impacts] can be very location-specific," Fairman said.

Understanding how local changes are affecting climate could be important for mitigating the overall impact of climate change, Nair said.

"Large-scale changes are hard to control because they involve the whole globe, but local changes are easier to control. If we find that deforestation adds to the changes, that's one thing that could be controlled regionally," he said. "And sometimes, the regional effects can be as strong, or even stronger than, the global effects."