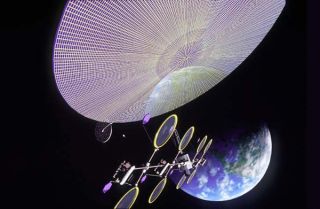 This giant disk floating in space isn't a UFO. It's a power generator, harvesting energy from the Sun for a variety of uses back on Earth. Such space-based solar power generators have many applications, not just on Earth, but also in space.
(Image: © NASA/MSFC)

Beaming solar power down from space still looks awfully futuristic more than four decades after it was proposed. But dreams of energy driven by eternal sunshine have pushed several projects forward in the United States, Europe and Japan.

The main issue, as usual, is money. In the United States, neither the military nor civilian agencies seem interested in taking a leap of faith with taxpayer dollars, which has left it to private companies to carry the torch. Elsewhere, only the Japan Aerospace Exploration Agency (JAXA) has begun moving forward with private partners to develop space-based solar power.

"Right now the big problem is there's no funding from the U.S. Department of Energy or NASA," said Marty Hoffert, a physicist at New York University and technical adviser for the company Space Energy.

Solar panel technology is up to the task of collecting sunlight in space without interruption from the Earth's day-night cycle, weather or seasons. Yet lack of funding may make it difficult for researchers to tackle the other technical difficulties still facing space-based solar power.

Advocates remain split about the best way to transmit solar energy down to Earth. The California-based Solaren Corp. plans to use microwaves to supply power for utility giant Pacific Gas & Electric by 2016, while Europe's EADS Astrium is investigating laser beams for the job.

Lasers may run into more problems with atmospheric interference and weather. But tightly focused laser beams would require much less expensive equipment in space and on the ground than microwaves would, because microwaves spread out more as they travel.

Such spread means a 1-kilometer-long transmitting antenna (0.62 miles) in orbit might require 100 square kilometers (39 square miles) of receivers on the ground.

"If you received part of the microwave beam with a [standard-size] radar dish, you'd just capture a few milliwatts," Hoffert pointed out. "You couldn't even light up a Christmas tree bulb."

By contrast, Hoffert said, a focused laser could deliver enough collectible energy to such a receiver to power a village. He and other advocates of space-based solar power had suggested an experiment based on the International Space Station that could do just that, but NASA canceled such a space station experiment in 2008.

The cost of sunshine

Keeping down the equipment cost represents just one part of trying to make space-based solar power a competitive alternative to Earth-based renewable energy sources. It goes hand-in-hand with the problem of astronomical costs for space launches.

A cost analysis by JAXA and another Japanese space agency, the Institute for Unmanned Space Experiment Free Flyer, suggested that space-based solar power eventually could cost just 10 to 20 cents per kilowatt hour, which would make it as competitive as fossil fuel power costs. But that depends on many assumptions for bringing down the costs of access to space.

"There is a large uncertainty in the cost estimate," JAXA officials said. "For example, the current space transportation cost is assumed to be reduced by a factor of 50-100 using reusable launch vehicles expected in the future."

Given the challenges, JAXA expects a commercial space solar power system (SSPS) no sooner than in the 2030s.

That assessment does not account for California's Solaren, which has claimed it can convert and transmit solar energy with high efficiency to meet its 2016 goal. But Hoffert, one of the staunchest space-based solar power advocates, has his doubts about the company being able to meet that goal.

The U.S. government may yet play a bigger role in funding the future of space-based solar power, if someone within the bureaucracy is willing to step up to the plate.

The National Security Space Office's Advanced Concepts Office noted that development often "falls between the cracks" among the different government bureaucracies such as NASA and the Department of Energy. It suggested that a new governmental body might be needed to take responsibility for space-based solar power.

Momentum may eventually shift in the direction of space-based solar power as sustainable energy sources become an ever-bigger issue around the world.

"Japan has continued SSPS research for 30 years because many people – researchers and policymakers – believe a new energy system is indispensable for resource-poor Japan," JAXA officials said.