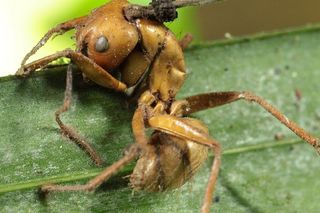 A dead ant, after being zombified by a species of parasitic fungus.
(Image: © David P. Hughes)

The world just got a little weirder: Scientists have identified four new species of brain-controlling fungi that turn ants into zombies that do the parasite's bidding before it kills them.

Identified from samples collected at two sites in Brazil's tropical rain forest, each of the four species specializes in controlling a different species of carpenter ant.

The original zombie-ant fungus, Ophiocordyceps unilateralis, was first identified in 1865, and it seems to exist around the world. [Mind-Controlling Parasites Date Back Millions of Years]

"So we knew, right off the bat, there was a range of other species within that," said study researcher David Hughes, an entomologist at Pennsylvania State University. "I think it will turn out to be in the hundreds."

Once it infects an ant, the fungus uses as-yet-unidentified chemicals to control the ant's behavior, Hughes told LiveScience. It directs the ant to leave its colony (a very un-ant-like thing to do) and bite down on the underside of a leaf — the ant's soon-to-be resting place. Once it is killed by the fungus, the ant remains anchored in place, thanks to its death grip on the leaf.

Ultimately, the fungus produces a long stalk that protrudes from the ant's head, shooting spores out in the hopes of infecting other ants. Two of the four newly discovered species also sprouted smaller stalks elsewhere, including from the victim's feet and lower leg joints – the equivalent of knees.

The spores of the four species also had distinct features and germination processes.

Hughes is concerned that one of the four fungus species, O. camponoti-novogranadensis, may not be around for much longer. During their visits to Brazil, Hughes and his colleagues saw that the high-elevation site where the species was found had become markedly drier and hotter. Hughes attributed the change in conditions at the Parque Estadual de Itacolomi, which is near the World Heritage Site Ouro Preto, to global warming.

The ants can survive this shift in the local climate, but "the fungus can't," he said. "What we think we will see is the extinction event of the fungus we just managed to describe." (Hughes said fungi are essential aquatic organisms living in terrestrial environments, making them extra-sensitive to a drying climate.)

The research by Hughes and colleagues Simon Elliot and Harry Evans appears online today (March 2) in the journal PLoS ONE.