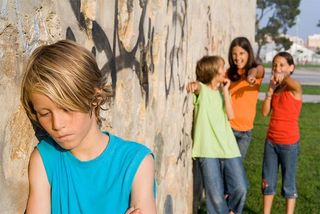 Making fun of someone who is different can lift a person back up after a fall.
(Image: © Dreamstime)

Just failed a test or screwed up a project at work? Chances are more likely you'll put down others who are different from you to try to lift yourself back up, a new study suggests.

Psychologists have considered two possibilities why people feeling bad about themselves might show more prejudice than the highly confident, Sherman said: Low self-esteem either enhances negative evaluations of others, or makes you less likely to suppress those biases you already harbor.

There was no agreement on either — "People were using the exact same data to make completely different arguments about why," Sherman said — so Sherman and California-Davis colleague Thomas Allen set out to determine the "why" for themselves. Their conclusion: Low self-esteem increases the intensity of negative prejudices.

The researchers set up an experiment to break down the egos of some participants and then see how likely they were to show racial prejudice.

The researchers had 57 students take a very difficult 12-question test that requires creative thinking. No one answered more than two items correctly. About half of the participants were given their lousy test results and told the average score was 9, to make them feel bad about themselves. The others were told their tests would be graded later.

Then the groupings were reversed with participants having to press one key for black faces or positive words, and another for white faces or negative words.

As expected, those who were feeling bad about their test performances showed more evidence of implicit prejudice.

Why we kick others

The researchers then applied the results to a computer model that included four processes that could occur to get to the end result, such as the degree to which our biases get activated in the brain, and whether we overcome such biases. They found that people who felt bad about themselves were more likely to show prejudice not because they became less likely to suppress the feelings they already had, but because those feelings were activated to a greater degree.

The difference is subtle but important, Sherman said.

"If the problem was that people were having trouble inhibiting bias, you might try to train people to exert better control," he said. "The issue is that our mind wanders to more negative aspects of other groups.

"The way around that is to try and think differently about other people. When you feel bad about yourself and catch yourself thinking negatively about other groups, remind yourself, 'I may be feeling this way because I just failed a test or something.'"

The research was detailed online Feb. 11 in the journal Psychological Science.