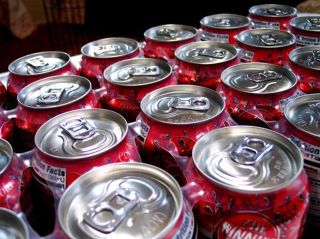 Drinking diet soda is associated with a 50-percent increase in stroke risk, according to a study presented earlier this month at the American Stroke Association's International Stroke Conference in Los Angeles.

Not surprisingly, reaction to the news among dieters has been disparaging and defensive, as each person cycles through the Kubler-Ross five stages of grief, from denial and anger to bargaining, depression and acceptance.

"Now the health police tell us we can't drink Diet Coke," captures the tone on many of the diet blogs.

If it's any consolation for diet-soda fans, the results presented at the meeting — based on preliminary analysis from a 2,500-person subset of the ongoing Northern Manhattan Study (NOMAS) — are far from definitive. There's no way to tell yet, for example, what ingredient would be associated with strokes or whether lifestyle choices among drinkers are the real cause.

That said, is drinking diet soda safe? Of course not, especially when it is the main source of liquid refreshment every day. You're drinking copious amounts of phosphoric acid, artificial colors, artificial flavors, and some laboratory-crafted chemical that tricks your brain into perceiving the sensation of sweet.

Diet soda is an alternative to regular soda, but neither is healthy. You are merely trading calories from sugar for chemicals of questionable nature.

The proliferation of diet soda cuts to the core of what's wrong with the Western diet. The Western approach is to remove the most obvious dangers from an unhealthy habit — in this case, removing the 12 teaspoons of sugar per can of fizzy water laced with acids, colors and flavors of uncertain origin — so that we can continue that habit in denial of other dangers.

The underlying problem is that we are addicted to sugar; beverages without a sweetener now seem bland. For the first million years or so of pre-human and human existence, water was adequate to quench our thirst. But apparently no longer.

Hold the sugar and corn syrup and pass the aspartame. Some doctors actually encourage dieters to drink diet soda to cut calories instead of recommending zero-calorie water or tea.

We see this "short-cut" diet phenomenon also among some people who want to be vegetarian. They eat vegetarian hot dogs and other faux-meat dishes made from heavily processed soy and vegetable meal loaded with salt, sugar and fat. This is likely unhealthier than the meat they are shunning.

So, similarly, at issue is that we are so addicted to meat that meals without it no longer seem satiating. To do vegetarianism right, you'd have to learn how to cook lentils, beans, grains and other staples of a vegetarian diet, and that's too consuming for many people.

Writing on the wall

Studies on diet soda have been flawed, because researchers have discounted one important fact: Those drinking diet soda likely drink it not because they are health nuts but because they have a certain health condition. They are either overweight or diabetic. Thus, they are at risk for strokes, heart attacks and cancer regardless of the type of beverage they prefer.

One of the more impressive aspects of the NOMAS project is that researchers can control for weight and other health conditions. It's inevitable that NOMAS and similar studies will tease out the dangers of drinking too much soda in general, either diet or regular.

It is a shame the United States cannot adopt Asia's tradition of unsweetened teas, ubiquitous in shops and vending machines. But even otherwise healthy green tea in the United States is tainted with sugar or artificial sweetener — yet another example of corrupting a healthy alternative.

The bottom line is that dieters need to cycle through those Kubler-Ross stages to reach acceptance: Diet soda is no healthy alternative, and nothing beats water.