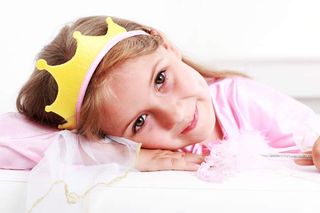 Girls the world over often go through a "princess phase," enthralled with anything pink and pretty — most especially the Disney princesses.

When it happened to Peggy Orenstein's daughter Daisy, the contributing writer for the New York Times Magazine stepped back to examine the phenomenon. She found that the girlie-girl culture being marketed to little girls was less innocent than it might seem, and can have negative consequences for girls' psychological, social and physical development.

Orenstein's exploration took her to Walt Disney World, the American Girl flagship store in New York City and a child beauty pageant. She details her quest in the new book "Cinderella Ate My Daughter: Dispatches from the Front Lines of the New Girlie-Girl Culture" (Harper Collins, Jan. 25).

She spoke to LiveScience about the undercurrent of princess culture.

LiveScience: How did you get inspired to write the book?

Orenstein: I'm a mother, and I think that when you're an adult, you don't really notice what's going on so much in the world of kids' culture. And then you have a kid, and suddenly it's kind of shocking how segmented the market is for girls and boys, and when you're looking at girls' stuff it's just like everything has been dipped in Pepto-Bismol.

And so I started to go, 'What is this?' You know, girls are doing so well academically, they're doing so well in leadership, they're doing so well on the sports field. Maybe all this is no problem and it just means we're free to indulge this. Or, is it something else? Is it that somehow, simultaneous to those gains, the pressure on girls to define themselves by their looks, and define looks in a very narrow way as being sexy and hot, and that too has been ratcheted up, and lowered down so that it starts, you know, basically in the womb.

A lot of people were looking at issues of eating disorders or depression, or sexuality or culture, and issues in teenagers. But obviously these things don't just burst forth on your 13th birthday. And I really wanted to see what was going on in the culture of little girls.

You examine a lot of aspects of girls' culture, but specifically the Disney princesses. What sort of messages might be getting through to girls though these products?

Orenstein: When you look through the princess products there's a lot of makeup, there's a lot of 'my princess wedding,' you know, things that are pretty retrograde on that level. But while they're not sexualized per se, they're certainly appealing to what goes kind of hand-in-glove with that, as girls are going to get older, which is about consumerism and narcissism. And certainly they're encouraging girls to, you know, think that looking pretty and getting a lot of feedback from others about what a pretty princess you are is pretty important, and that having the most stuff is very important.

You talk about a lot of examples, beyond the princess products, of problematic toys. What are some others?

And my daughter looked at those and said, 'Mom, why do they want me to put that on my purse?' And I said, 'Gosh, I don't know.'

And so there's this weird way that the ideas that were being put forth in the girl power slogans of the 1990s, which were about self-actualization and self-determination, and being valued for what you do and not how you look, have been distorted so that it's its own opposite, so that girl power means being valued for how you look instead of what you do. And that being confident is expressed by being spoiled, pampered, bratty, narcisistic.

So just how bad are these things?

Orenstein: Some of these things, like the Disney princesses, and all the princess culture that it's spawned, seemed innocent, protective, easy, harmless – and maybe it is. And maybe it's not. But I think that parents need to have more context about girls' culture to understand the decisions they're making and make them so that they'll be in concert with their values.

Orenstein: I see that with girls, they do believe that, a lot of them. They won't play with it if it's not pink.

There's an anecdote I share in the book, also about my poor daughter, she ends up being focused on. But she was going on her scooter with another little girl when she was 5. And Daisy's helmet was black with flames shooting across it in green, yellow, orange and red, I think, and she has a regular silver razor scooter. And her friend had a pink Hello Kitty helmet and a pink scooter.

And her friend actually looked at it – I mean, I swear, these kids sometimes just hand me these things – but she looked at Daisy and said, 'How come your helmet's not pink? It's not a girl's helmet.'

And Daisy looked at it, and she kind of furrowed her brow for a second, kind of like, 'Oh, what, hmm,' then she said, 'Well, it's for boys or for girls.'

And the other girl kind of looked at it, and she said, 'Oh,' and they kept playing.

I thought, so look at that interaction, what went on? Did Daisy learn that maybe she should stick with the pink and not be questioned? Or did that other girl learn that maybe there's something out there, maybe the one measly pink Lego set in the store is not the only thing she could play with? You know, I don't know.

You also address a term called KGOY – kids getting older younger – along with the earlier and earlier sexualization of little girls. What's going on there?

Orenstein: While girls may be physically developing at a younger age, psychological development hasn't changed. So girls are playing with toys or wearing clothes or watching videos or otherwise partaking of a culture that is too mature or sexual for them, and they're encouraged to sort of play-act at sexy. [Girls Entering Puberty at Younger Ages, Study]

If you take a look at any girl product line, you're going to start finding massive amounts of makeup, and you know, the sexy Halloween costumes and everything for 6-year-olds. So on one hand, it's dress-up, on the other hand, it's sexualizing in a way that really isn't necessary.

You spoke to scientists about how this affects girls' development. What did you learn?

Orenstein: What really floored me, both as a girl-advocate and as a parent, was the way that prematurely sexualizing girls or play-acting at sexy for them from a young age disconnects them from healthy authentic sexual feeling. So that they learn that sexuality is something that you perform, instead of something that you feel.

And that can have implications as they get older in the culture, both because of that, and because that's increasingly what they're going to be presented with – the idea that their sexuality is something to perform for others. And so starting that at the age of 4, 5, or 6 is troubling for a whole set of reasons that I hadn't anticipated when I started this.

There was one researcher who works on girls' sexual desire issues and she told me that by the time the girls she talks to are teenagers, when she asks them how a sexual encounter – and by sexual encounter I don't mean necessarily intercourse, but anything you would define as a sexual encounter – how it felt, they respond by telling her how they think they looked.

That's really troubling. And also completely comprehensible in the context of how they grow up.

But there's this performative aspect of identity that starts really young and in our culture at this moment reaches a sort of apotheosis. Once they get a little older and they're creating profiles online and kind of performing their teenage identity as kids always do anyway, but suddenly doing it in this really public way in front of 322 of their best friends forever, right, and in this kind of disconnected fashion that we don't know the full implications of, but all of it, for girls in particular, reinforces this idea that who you are is how you perform, and who you are is how you look.

Do you see a backlash against this?

'I just think we want a lot for our daughters.' And rightly so.

So are you ever tempted to just sort of abscond with your family and your daughter and move to the woods or something like that?

Orenstein: In a word, yes. My husband talks about that all the time.

But you can't. One of the things in the book … I write in the end about 'Rapunzel' because I knew that 'Tangled' [a new movie based on the story 'Rapunzel'] was going to be coming out right around the time the book was coming out. I thought a lot about 'Rapunzel', and the real lesson about 'Rapunzel' is about mothers and daughters, and that you can't protect your daughter from the world by locking her into a tower.

I have to say, I did not anticipate when I decided to have a baby how much of my job was going to be protecting my child's childhood. And I think a lot of parents are really conscious of wanting their children to stay children and not be aged up.

I want my kid to be 3 when she's 3, I want her to be 5 when she's 5. But I also can't lock her in the tower. So what I really want to do, and what I hope the lesson of the book is, through my own journey and through the research that I put in, is how to arm your daughter so that she has the wherewithal, by the time she's older, to make good decisions for herself. Because eventually that's what it's going to be about and that's our role as parents.