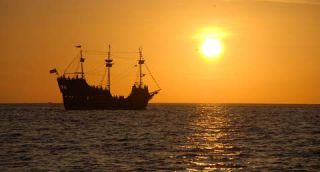 The Most Notorious Pirates Ever

Pirates are a hot topic these days, as modern buccaneers continue to terrorize the world's busy shipping lanes much like their counterparts did in the heyday of piracy several centuries ago. Despite having been glamorized in films and books, that classic pirate was just as feared as those currently making headlines. Many began pirating life as privateers — sailors hired by governments to act as part-time warships and marauders against enemy commerce ships in designated zones — but found the raiding so lucrative that they eventually struck out on their own. Some pirates were bloodthirsty, others merely greedy, and a few so successful or memorable that their names are still recognized after all this time. Check out 10 of the most infamous.

Edward Teach, aka Blackbeard, commandeered a reign of terror on the Caribbean Sea that lasted from 1716 to 1718. The sailor began as a privateer for Britain during the War of Spanish Succession, honing his craft as a sea robber before moving on to pirating. A fierce fighter, Blackbeard was as famous for his wild mane of hair as the way he captured ships.

History's most famous female pirate was as menacing as her male counterparts, gorgeous and intelligent to boot. The daughter of plantation owners, Anne left her structured life in the early 1700s and hit the seas. She joined Calico Jack Rackham's ship disguised as a man, but was spared the death sentence when the crew was captured because she was pregnant with his child, according to legend.

Despite dying at the ripe young age of 28, "Black Sam" Bellamy made a name for himself in New World pirating with several daring ship captures, including that of the Whydah Gally, a slave ship filled with a fortune in gold, silver and other goods. Bellamy made the Whydah Gally his flagship in 1717, but went down with it in a storm that same year.

The Golden Age of piracy ruled over the seas off China too, and women weren't a rarity aboard or even at the helm of the feared ships. Captured by pirates from a Cantonese brothel in 1801, Ching Shih orchestrated a meteoric rise to power and became one of those powerful female captains, eventually commanding a fleet numbering in the hundreds.

"Black" Bart Robers was one of the most successful pirates of the Golden Age, patrolling the waters off Africa and the Caribbean islands, taking upwards of 400 ships in just four years. The notedly cold-blooded sailor rarely left anyone aboard alive, prompting an intense manhunt by the British government that led to his death at sea.

Privateer or pirate? Scottish sailor William Kidd is famous for walking the blurry line between both, at first employed by the British government as the former but ultimately hanged in 1701 as the latter. Rumors about the location of an immense treasure he hid before his trial persist to this day.

So popular he had a rum named for him, Captain Morgan ruled the Caribbean seas as a privateer, then pirate, in the mid 1600s, famously wreaking havoc on the gold-laden Spanish colony of Panama City. He is also known as one of the few pirates to ever "retire" from activity with few repercussions.

The pioneer of the Jolly Roger flag, Calico Jack Rackham was a Caribbean buccaneer who had few epic plunders to his name, but is known for his association with Anne Bonny as well as his classic pirate death. Captured in Jamaica in 1720, Rackham was hanged, tarred and displayed as a warning to others in a location now called Rackham's Cay.

A noble to some but an outlaw to others, Drake spent time — between circumnavigating the globe and defeating the Spanish Armada in 1588 — engaging in piracy and slave-trading in the Caribbean. The raids he led, especially on Spanish colonies in Central America, took some of the richest bounties in pirating history.

The names Aruj and Hizir may not seem familiar, but the moniker given to the Turkish corsairs by Europeans — Barbarossa (red beard) — likely conjure up images of fierce, sword-wielding sailors on the Mediterranean. In the 16th century, using North Africa as a base, the Barbarossa brothers attacked multiple coastal towns with their band of Barbary pirates and became some of the region's most influential men.