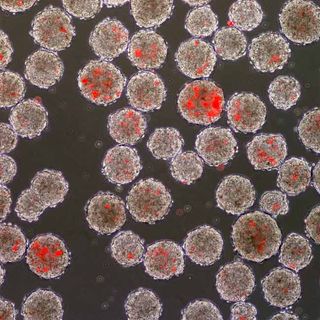 In the wake of controversy over the possible discovery of arsenic-eating life last week — a finding that could expand the bounds of what scientists think life is capable of — a basic question perhaps deserves revisiting:

Just what, exactly, is life?

"We don't have a very good definition of life," said researcher Christopher Voigt of the University of California, San Francisco, who works on synthetic biology. "It's a very abstract thing, what we call life, and at what point we say something doesn't have the necessary components versus it does, it just becomes way too murky."

The question of what constitutes life has dogged scientists since the early days.

Working toward a definition

Aristotle was the first to attempt to define life, and his proposal boils down to life being something that grows and maintains itself (he called this "nutrition"), and reproduces.

In 1944, Austrian physicist Erwin Schrödinger defined life as that which resists decaying to disorder and equilibrium. This definition relates to the second law of thermodynamics, which states that closed systems will naturally gain entropy, or disorder, over time. Essentially, like a teenager's room, without any help from mom, it will inevitably get messier. But by taking in nutrients and metabolizing them, living things can work against this trend.

However, this definition would mean that crystals, which take in energy and create order when they form elaborate lattices of particles, count as life.

This is the problem with most proposed definitions of life: They tend of have loopholes.

For example, some have proposed that life is that which can reproduce itself. However, that definition would exclude mules, which are born sterile, and would include nonliving things like fire.

Others have suggested that life is something that can metabolize — that is, take in energy to move or grow, and release waste — but many nonliving things, like cars, can do that.

"Life, because it is such a complex system of things with so many interacting parts, each of which is essential, it's really tough to make a definition," said biochemist David Deamer of the University of California, Santa Cruz.

Despite the difficulty of pinning down life, some scientists aren't content to give up, saying a working definition of life is necessary if we are to identify living things beyond Earth. In that case, the adage, "You'll know it when you see it" just doesn't cut it.

But maybe we can find extraterrestrial life without knowing what it is.

"The practical approach to the search for life is to determine what life needs," wrote astrobiologist Chris McKay of NASA's Ames Research Center, in a 2004 paper in the journal PLoS Biology. "The simplest list is probably: energy, carbon, liquid water, and a few other elements such as nitrogen, sulfur and phosphorus."

That's where discoveries like the recent arsenic finding come in. A team of researchers led by Felisa Wolfe-Simon of NASA's Astrobiology Institute announced Dec. 2 that they'd found a kind of bacteria that can use arsenic in the place of phosphorus to build its DNA. The organism was unearthed in California's Lake Mono.

Thus the discovery seems to negate the last requirement on McKay's list (phosphorus), and opens up the field to a wider array of habitats that could support alien life.

Yet since the finding was announced, other scientists have questioned the researchers' methods, wondering whether the arsenic was really being incorporated into the microbe's DNA, and if there was a chance trace amounts of phosphorus were available to the bacteria.

Whether or not this discovery holds weight over time, it's possible that some of scientists' basic assumptions about what life is and what it requires to survive will need to be revised.

And the quest to understand life is inextricably twined with the search for extraterrestrial life. Some scientists maintain that we likely won't be able to define life until we discover more of it beyond Earth.

"We won't come up with an adequate account of life until we have examples of life as we don't know it," said Carol Cleland, who studies the philosophy of science at the University of Colorado, Boulder. "We have a single example of life, and you just can't generalize on the basis of a single example."

And some experts contend that the never-ending quest to come up with the ultimate definition of life misses the point.

"I don't think definitions are the right way to go," Cleland told LiveScience. "People tend to make definitions when they lack theories and they want to understand something. All this insistence on defining life strikes me as a sure sign that we really don't have a good theory of life."

Cleland likened the situation to early scientists trying to define water before they understood chemistry. It took the discovery of the elements hydrogen and oxygen for scientists to understand water as a compound of the two.

Rather than focusing on definitions, scientists should work on broadening their conceptions of what life is in order to build up a theory of life, she said.

She compared it to the quest to understand matter in motion. Early scientists focused on properties like volume, weight or impenetrability to define matter. It wasn't until the late 16th century that the concept of matter as inertial mass — something that resists a change in motion — was proposed. That concept was what allowed Isaac Newton to formulate his three laws of motion.

"Suddenly we had this important theory of physics," Cleland said. "You've got to start with the right concepts in order to formulate theories."

Limiting life to a strict definition at this point could hamper the quest to understand life.

"I think definitions can actually serve more to hinder than advance scientific knowledge, and they can blind us to exceptions to the rule," she said.

And some scientists are content to let the matter rest for a while.

"For what we do, [a definition of life] is unnecessary," Voigt said. "It's sort of like a lot of big questions in science: 'Where are we from? How did the universe get created?' These are big questions that we'll probably never be able to solve. But not knowing what life is doesn't change our ability to engineer it."

Ultimately, some experts are hopeful that a definition of life will eventually be possible.

"It's not futile – we're still adding up the parts," Deamer said. When scientists know enough to be able to recreate life from scratch, then they'll know enough to define it, he said.