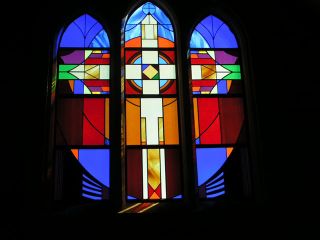 Photo taken by Melodi 2. (melodi2) There are no usage restrictions for this photo

﻿The Virgin Mary has apparently had a busy holiday season, making recent appearances in several states over the past few weeks.

The spate of Marian apparitions began earlier this month when Mari Valenzuela of Alhambra, Calif., noticed an image of the Virgin Mary in her melted candle. The stalagmitic lump, about an inch high and made of soft white wax, resembled a woman’s head and torso. Valenzuela showed the miracle to her priest, who assured her that it was a sign that her life was on the right path, according to a report from KTLA Channel 5 News.

The Virgin Mary next showed up, welcome but uninvited, to a backyard barbeque in McAllen, Texas. Rigo Garza hosted family and friends for a party, and one of his guests wandered over to his wooden fence. There, in a darkened oval knot of wood, the Virgin Mary appeared, according to Stephanie Bertini of local station KRGV-TV. Garza said that as soon as they saw it they knew it was a blessing from God. In fact, he credits the image with helping his mother's recent surgery go well, and the Garza family has constructed a small shrine for others to offer their prayers.

And just this week a woman in Dallas, Texas, reportedly photographed a transparent, oblong miracle. Aimee Guzman took a photograph through the back window of her Ford Expedition that she believes is of the Virgin Mary. According to a report from NBC affiliate KGNS, the woman attempted to clean the image off the window, but was unsuccessful. (It's not clear why Guzman would try to remove an image she believed was a miraculous appearance of the Virgin Mary.)

It's not surprising that human-shaped forms might be interpreted as religious figures, especially around the religious holidays. People see these images for the same reason they see faces in clouds, Rorschach blots and coffee stains. This phenomenon, called pareidolia, is well known in psychology, and it is the cause of many supposedly mysterious and miraculous events (including the famous "Jesus in the Tortilla"). Whether the result of a miracle or mundane psychological process, the sightings are welcomed by the faithful.