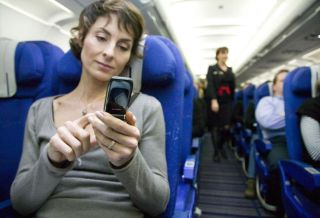 A new study reveals a twist that helps explain why nearby cell phone conversations can be so annoying. Overhearing half of a verbal exchange, it turns out, is much more distracting than having to listen to a full conversation going on in the background.

Researchers found that in a simple attention game, study participants did three times worse when hearing a cell phone conversation – a "halfalogue" – compared to a face-to-face dialogue, a monologue or silence.

When researchers muddled the cell phone conversations' words, however, this performance gap in the attention task and in a reaction time test vanished.

The results suggest that it is the unpredictable informational content – the randomness of what is being said, essentially – in a half-heard exchange that makes cell phone banter exquisitely irritating.

"When we get less information, we're impaired," said psychologist Lauren Emberson of Cornell University in New York and lead author of the new study published in the journal Psychological Science. "We can't use this information to anticipate what's going to be said next and so it's much harder on our brains."

The findings might seem counterintuitive; after all, cell phone conversations such as those created for the study can fill the air with around half of the ambient vocal chatter generated by two people gabbing in public. For instance, speech was present in the study's dialogue situations 92 percent of the time versus 55 percent for one side of the mobile device-based talking.

But it is precisely this informational gap that reflexively draws our minds in to cell phone conversations within earshot, Emberson said.

"We use patterns in our environment to predict what's going to happen next, and this helps us a huge amount in the context of language," she told TechNewsDaily.

It is much easier, she explained, to understand a conversational partner or a background blabber "if you can predict what they're going to say."

Andrew Monk, a professor of psychology at the University of York in the United Kingdom who has studied this dynamic, agreed with the new study's findings that "for the overhearer" it is "hearing half the dialogue [that] triggers attention."

Many studies have shown that in humans and other animals, novel or unanticipated stimuli grab our attention – all the better to survive a sudden predator attack or recognize a bit of food, for example.

As a result, having our focus fragmented by cell phone chitchat when we're made into unintentional eavesdroppers might boil down to a matter of instinct. "We believe this [phenomenon] relates to a much broader view of language and behavior," Emberson said. "If something's not predicted then we may not understand it, and so then we pay attention."