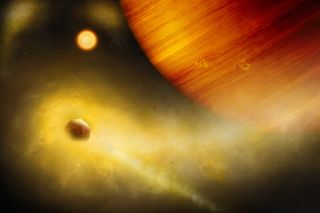 An illustration of a volcano-covered exomoon.
(Image: © University of Bern, Illustration: Thibaut Roger)

Though scientists have discovered nearly 4,000 exoplanets, researchers have yet to confirm the existence of an exomoon, or a moon that's orbiting a planet outside of our solar system. In October 2018, a study suggested that the planet Kepler-1625b, which is 8,000 light-years away, might have its very own moon — but that has yet to be confirmed, Live Science's sister site Space.com reported.

Now, a new study suggests that a moon could exist much closer to Earth, a mere 550 light-years away, orbiting a gas giant planet called WASP 49-b. And this moon is definitely not boring, as it might be covered with lava-spewing volcanoes.

WASP 49-b's predicted moon is like an extreme version of Jupiter's volcanically active moon lo, according to a statement from the University of Bern in Switzerland. "It would be a dangerous, volcanic world with a molten surface of lava, a lunar version of hot super-Earths like 55 Cancri-e," study lead author Apurva Oza, a postdoctoral fellow at the Physics Institute of the University of Bern, said in a statement.

Exomoons would generally be too tiny to detect using typical methods, according to the researchers. But in their new study, Oza and his team proposed that two gases, sodium and potassium, could be used to detect geologically active exomoons.

A decade ago, a group of researchers showed that sodium found far from an exoplanet could come from either a hidden moon or a ring of gaseous material. In the case of planet Wasp 49-b, previous research had revealed that the planet contained sodium gas at "unusually" high altitudes, the statement said.

"The neutral sodium gas is so far away from the planet that, most likely, it will not just be expelled from a planetary wind," Oza said.

Oza and his team used observations and measurements of sodium and potassium loss from Jupiter and its active moon lo to create a model of conditions that could indicate the presence of an exomoon. They then analyzed over a dozen gas giants outside of our solar system. Using the model, they predicted how much sodium and potassium loss would occur if these gas giants had exomoons.

When they compared to how much sodium they actually observed in the system, they found that Wasp 49-b fit their model. In other words, they found that it's possible the gas giant could have its own exomoon. But the unusual levels of gas could also have resulted from a ring of ionized gas, according to the statement.

"More observations and modeling are required to be certain," Oza told Live Science.

The findings were published on Thursday (Aug. 29) in the preprint journal arXiv and will be published in a forthcoming issue of The Astrophysical Journal.