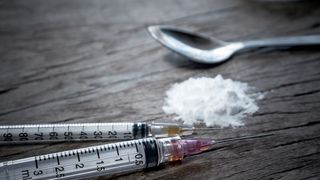 After increasing for decades, U.S. life expectancy is on the decline, and a new study reveals some of the reasons behind the alarming trend.

The study, published today (Nov. 26) in the journal JAMA, found that the decline is mostly among "working-age" Americans, or those ages 25 to 64. In this group, the risk of  dying from drug abuse, suicide, hypertension and more than 30 other causes is increasing, the authors said..

The findings suggest that life expectancy in the U.S. is rapidly falling behind that of other wealthy countries. Indeed, the particular decline among working-age adults has not been seen in other countries, and is a "distinctly American phenomenon," said study co-author Steven H. Woolf of Virginia Commonwealth University School of Medicine.

"Death rates among working-age adults are on the rise," Woolf told Live Science. "We have known for years that the health of Americans is inferior to that of other wealthy nations, but our research shows that the decline in U.S. health relative to other countries began as early as the 1980s."

The main culprits behind the decline appear to be drug overdose, alcohol abuse, suicide and a wide variety of organ system diseases among young and middle-age adults, especially individuals who did not complete high school. In particular, declines were seen among people living in some parts of New England, including Maine, New Hampshire and Vermont; as well as those living in the "Ohio Valley," which includes Indiana, Kentucky, Ohio and Pennsylvania.

These specific regions have been battered by the opioid epidemic and were among the most hard-hit victims of the collapse of the United States manufacturing sector. Indeed, more than one-third of excess deaths since 2010 have occured in the Ohio Valley states.

In contrast, life expectancy increased for those living along the Pacific coast from 2010 to 2017.

Data from past decades showed that U.S. life expectancy began to lose pace with that of other countries starting in the 1980s, the authors said.

"Historically this [period] was the beginning of the opioid epidemic, the shrinking of the middle class and the widening of income inequality," Woolf said.

Although many countries experienced economic shifts in the 1980s, Woolf suspects that the unique drop is U.S life expectancy may be due to lack of support for struggling families.

"In other countries, families that fall on hard times have programs and services available to cushion the blow. In America, people often have to fend for themselves," Woolf said. Absence of social services may also explain why the study found larger relative increases in mortality among women, "who have even fewer support systems, and more childcare responsibilities," he added.

Howard Koh of the Harvard T.H. Chan School of Public Health, who was not involved in the study, described the findings as "the most exhaustive and detailed analysis of this topic to date."

In addition to weeding out the causes of death, Koh told Live Science that one solution to America's declining life expectancy may be "embracing the leading causes of life" — that is, paying more attention to how social connections and strong community networks impact wellbeing. "Other countries spend relatively more in terms of social services," Koh said. "Health is much more than what happens in a doctor's office. It starts where people live, learn, labor and pray."

The stakes are no less than the life span of the average American. Before a few years ago "it was largely assumed that life expectancy would always increase in the future," Koh said. "Now the nation risks a future in which declining life expectancy may be the new norm."