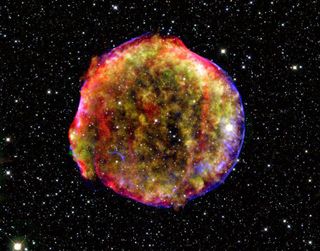 This composite infrared and X-ray image shows the flaming remnants of the Tycho supernova.
(Image: © NASA/JPL)

About 14 billion years ago, all the matter in the universe spontaneously erupted out of a single, infinitely small, infinitely dense speck. It's safe to say that this event, the Big Bang, was the largest explosion in the history of the universe. Now, scientists are looking at some of the smallest explosions in the universe — tiny chemical blasts in a 2-inch-wide (5 centimeters) tube — to try to explain how that primordial blast may have happened.

According to the authors of the new study, published Thursday (Oct. 31) in the journal Science, every explosion in the cosmos — whether it's a star going supernova or the last drop of gasoline combusting in your car's engine — follows a similar set of rules.

However, those rules are especially hard to peg down for unconfined explosions (those that occur out in the open, without any walls or barriers boxing them in), as these blasts can transform from a nugget of flame into a chaotic fireball with seemingly no provocation. Now, after studying a series of controlled chemical explosions in their lab, the study authors said they've figured out a "unified mechanism" of unconfined explosions that links the smallest and largest blasts in the universe.

The key, the team found, is turbulence; with enough turbulence roiling a flame, large amounts of pressure can build up, until the flame releases a shock wave that sparks an explosion. This discovery could be a critical tool in understanding exactly how supernovas occur and might even give scientists a clue as to how the Big Bang spontaneously evolved from a nub of matter into the universe as we know it, the researchers said.

"We defined the critical criteria where we can drive a flame to self-generate its own turbulence, spontaneously accelerate" and then explode, study co-author Kareem Ahmed, an assistant professor at the University of Central Florida, said in a statement. "When we started to dig deeper, we realized that this is relatable to something as profound as the origin of the universe."

Explosions can release energy in two ways: through deflagration, when a flame releases pressure waves that move slower than the speed of sound (think a flickering candle releasing heat), or detonation, when waves move outward at supersonic speeds (think a stick of TNT exploding). In many cases, deflagration can lead to detonation, and that transition (known as the deflagration-to-detonation transition, or DDT) is key to explaining how supernovas blast into action, the study authors wrote.

Simulations in previous studies have shown that flames in the process of deflagration can spontaneously accelerate if they're exposed to lots of turbulence. This acceleration produces strong shock waves that make the flame increasingly unstable, which may ultimately turn the event into a violent detonation.

This process could explain how white dwarfs (the compact corpses of once-mighty stars) can smolder in space for millions of years before spontaneously erupting in supernova explosions. However, the DDT explanation of supernova explosion has only ever been validated in simulations and never tested experimentally. (Supernovas are notoriously hard to create on Earth without incurring significant medical and maintenance costs.) So, in their new study, the researchers tested the process through a series of tiny chemical explosions, which may evolve the same way that a distant supernova would.

The team ignited their explosions in a special device called a turbulent shock tube, a hollow, 5-foot-long (1.5 meters), 1.8-inches-wide (4.5 cm) tube capped with a spark igniter at one end. The other end of the tube was left open (allowing for an unconfined explosion), and the entire apparatus was lined with cameras and pressure sensors.

The team filled the tube with various concentrations of hydrogen gas, then sparked a flame. As it expanded and propelled toward the tube's open end, the flame passed through a series of tiny grates that made the fire increasingly more turbulent. Pressure mounted in front of the turbulent flame, finally creating supersonic shock waves and triggering a detonation that rocketed down the length of the tube at up to five times the speed of sound. (No scientists were injured by these controlled explosions.)

With the results from the chemical flame experiments, the researchers created a new model to simulate how supernova explosions could detonate under similar conditions. The scientists found that, given the right density and type of matter inside a star, a white dwarf's burning interior could indeed create enough turbulent waves to spark a spontaneous explosion, just like the ones seen in the lab.

These results, if verified by further research, will do more than just expand our scientific knowledge of stellar explosions; they could also improve our understanding of the (considerably smaller) explosions that propel our cars, planes and spaceships here on Earth, the researchers said. Keep your ears open for the bigger bangs yet to come.