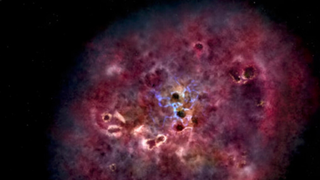 Before our universe reached its 1 billionth birthday, an unusual galaxy formed and began whipping up new stars at astounding speeds. Then, a mere 800 million years later, the ultramassive galaxy suddenly fell silent, according to a new study.

The enormous galaxy, called XMM-2599, stood out as a rarity in the early days of the universe.

"In general, early-formed galaxies should be smaller in mass, because the current model of structure formation is hierarchical — small, low-mass galaxies would be expected to form first, and then they would merge to form bigger more massive galaxies at a later time," co-author Danilo Marchesini, a professor of physics and astronomy at Tufts University, said in a statement. But XMM-2599, with six times the mass of the Milky Way, completely defies these predictions.

Some numerical models predict that such monster galaxies existed in the early universe, but those predicted galaxies are expected to be actively forming stars, Gillian Wilson, a professor of physics and astronomy at the University of California, Riverside (UCR), said in a statement from the university. "What makes XMM-2599 so interesting, unusual, and surprising is that it is no longer forming stars."

And no one knows why.

Marchesini, Wilson and their colleagues described the perplexing discovery in a new study published today (Feb. 5) in The Astrophysical Journal Letters.

Related: The 12 strangest objects in the universe

The team spotted XMM-2599 by measuring the electromagnetic radiation emanating from distant stars, which allows researchers to determine the chemical and physical properties of galaxies. The radiation must often travel across vast expanses of space before reaching Earthbound instruments, and the journey can take a long time. That means that, by taking spectroscopic measurements, scientists can glimpse what our universe looked like in the distant past.

Using their measurements, the team developed mathematical models to predict how XMM-2599 would have formed through time. "Even before the universe was 2 billion years old, XMM-2599 had already formed a mass of more than 300 billion suns, making it an ultramassive galaxy," lead author Benjamin Forrest, a postdoctoral researcher in the UCR Department of Physics and Astronomy, said in the UCR statement.

The model suggests that the galaxy generated most of its stars in a "huge frenzy" when the universe was less than 1 billion years old, Forrest said. During peak production, the galaxy churned out more than 1,000 solar masses each year; in the same time, our Milky Way formed only one new star, the statement noted. The models predicted that XMM-2599 should have continued to produce new stars, as most galaxies did in that epoch of cosmic history. Instead, the monster galaxy fell dormant, perhaps due to a lack of fuel or because of activity from the black hole at its center, Wilson said.

Related: Cosmic record holders: The 12 biggest objects in the universe

"We have caught XMM-2599 in its inactive phase," Wilson said. While the galaxy no longer makes new stars, it cannot lose any of its accrued mass, he added. "As time goes by, could [XMM-2599] gravitationally attract nearby star-forming galaxies and become a bright city of galaxies?"

In theory, XMM-2599 could become a central figure in one of the "brightest and most massive clusters of galaxies in the local universe," co-author Michael Cooper, a professor of astronomy at the University of California, Irvine, said in the UCR statement. "Alternatively, it could continue to exist in isolation. Or we could have a scenario that lies between these two outcomes."

The authors don't yet know why XMM-2599 stopped producing stars, or how the galaxy might evolve in the future. They do conclude that, given how suddenly the galaxy fell inactive, the existence of XMM-2599 "[challenges] our current understanding of how ultra-massive galaxies form and evolve in the early universe."