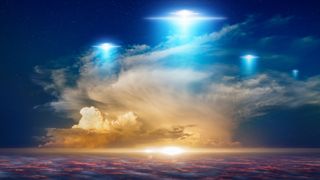 When not seeking UFOs, To The Stars Academy of Arts and Science will be partnering with the U.S. Army on projects involving energy propulsion, quantum physics and space-time engineering.
(Image: © Shutterstock)

A private company that researches UFOs has a new contract with the U.S. government, for developing technologies that could enhance ground vehicles in the military.

To The Stars Academy of Arts and Science (TTSA) was launched in 2017 by former Blink-182 guitarist Tom DeLonge; in December of that year, TTSA became the first company to share videos that showed U.S. Navy pilots interacting with UFOs. It was able to obtain the footage "by leveraging its team's access" to the material, according to the company website. (The videos may not have been officially cleared for public viewing, Live Science reported in September.)

Other divisions at TTSA focus on new technology. On Oct. 17, TTSA representatives announced that the group had entered into a Cooperative Research and Development Agreement (CRADA) with the U.S. Army Combat Capabilities Development Command, according to a statement.

The five-year contract outlines a research collaboration, and the U.S. Army will provide at least $750,000 in support and resources for developing and testing TTSA technologies, Motherboard reported on Oct. 21.

Alongside TTSA's technology production and theoretical research is an entertainment division that is "at the forefront of socializing the UFO conversation," the company says. TTSA maintains a film archive of UFO sightings, and key TTSA personnel — several of whom previously held U.S. government positions — were featured in the documentary series "Unidentified: Inside America's UFO Investigation," which aired on the History Channel in May.

A U.S. Army representative hailed the new partnership in a statement as "an exciting, non-traditional source for novel materials and transformational technologies."

While the U.S. Army's interest in the project stems from its potential applications toward enhanced military performance, TTSA has other plans for the results of the collaboration, and expects to apply their findings toward "commercialization and public benefit," Steve Justice, TTSA's chief operations officer and Aerospace Division Director, said in the statement.

Whether that includes UFO-related applications, however, remains to be seen.