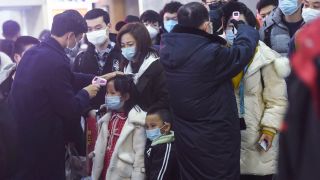 Staff members check the body temperature of passengers after a train from Wuhan arrived at Hangzhou Railway Station in Hangzhou, China.
(Image: © STR/AFP via Getty Images)

Update on Jan. 26: A third person in the United States has been infected with the new coronavirus, officials reported. This person had returned to Orange County, California, from Wuhan, and is said to be in "good condition." For up-to-date news and information on the coronavirus, visit Live Science's coronavirus update page.

A second patient in the U.S. has tested positive for the new coronavirus from Wuhan, China, according to the Centers for Disease Control and Prevention (CDC).

The woman, a 60-year-old Chicago resident, had recently traveled to Wuhan and arrived back on Jan. 13. A couple of days after she returned, she began to experience symptoms and went to her doctor. The woman is now hospitalized in an isolation room, but she is in stable condition and doing well, Dr. Allison Arwady, the commissioner of Chicago's Department of Public Health, said during a news conference today (Jan. 24).

Since returning from China, the woman has had "very limited" movement outside her home, hasn't taken any public transportation and hasn't gone to any large gatherings, Arwady said. She wasn't traveling with anyone but those close to her in her home are being monitored for symptoms, Arwady added.

Related: New coronavirus from China: Everything you need to know

The first confirmed patient in the U.S. with the virus was a man in his 30s who also traveled to Wuhan and returned on Jan. 15 to his home in Washington state. This patient was also hospitalized, and is in good condition, according to the latest report. Neither patient had symptoms while they were traveling back from Wuhan, according to the CDC.

"The immediate risk to the U.S. public is low at this time but the situation continues to evolve rapidly," Dr. Nancy Messonnier, the director of CDC's National Center for Immunization and Respiratory Diseases, said during the news conference. Overall, the CDC is currently investigating 63 people (including the two that tested positive) in 22 states for a possible infection with the new virus. Eleven of those patients have so far tested negative for the virus.

In China, the government has stopped most of the travel to and from Wuhan as well as 12 other nearby cities, according to The New York Times. This "lockdown" affects about 35 million people, the Times reported.

So far, there have been 835 confirmed cases of the infection in China and at least 25 people have died, new study published today (Jan. 24) in the journal The Lancet. There's still much unknown about how severe the new virus is in comparison with other coronaviruses, like the ones that just cause a common cold, or the ones that can cause severe symptoms such as the severe acute respiratory syndrome (SARS), which killed 1 in 10 people who were infected.

Most of the patients who have died from the infection have been older than 60 and have had preexisting conditions. But more recently, a young healthy man died in Wuhan, raising concern that the virus might be more dangerous than thought, according to The Washington Post.

Similar to SARS, the majority of cases of this new coronavirus affected healthy people, according to the new Lancet study. A group of researchers analyzed the first 41 patients who were infected with the new coronavirus and admitted to a hospital in Wuhan. They found that most of these patients had visited the Huanan seafood market (where investigators think the first transmission to humans might have occured), most were men and on average most were of middle age.

Despite sharing some symptoms that were similar to SARS (such as fever, dry cough and shortness of breath), there "are some important differences," such as the absence of upper respiratory tract symptoms like runny nose, sneezing and sore throat and intestinal symptoms like diarrhea, which affected 20% to 25% of SARS patients, lead author Bin Cao, from the China-Japan Friendship Hospital and the Capital Medical University, both in Beijing, said in a statement.

However, the authors note that they did not study all of the cases in the outbreak, and critically, the cases they did examine did not include the mild ones, so the study comes with some limitations that make it difficult to assess risk factors for disease severity and mortality.

"This is a rapidly changing situation both abroad and domestically," Messonnier said during the news conference. "Let's remember this virus is only identified within the past month and there is much we don't know yet."