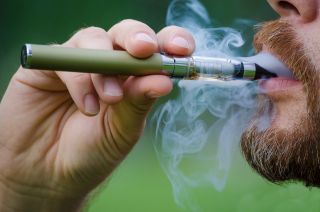 A second person has died from a lung illness related to vaping, according to a statement from the Oregon Health Authority (OHA).

Over 200 patients across the country — mostly young adults and teenagers — have been hospitalized with vaping-related respiratory illnesses in the last couple of months. The cause of the illnesses, and whether or not they're related to a specific brand or chemical in the electronic cigarettes that are being smoked, are questions that are still being investigated. Only one other death has been reported in connection with these illnesses, in a patient in Illinois.

Now, authorities have identified a second patient, an individual in Oregon, who died back in July from such an illness. The patient had reportedly used an e-cigarette or vaping device that contained cannabis, which they had purchased from a cannabis dispensary, according to the statement.

Health officials recently identified a common contaminant in some of the cannabis products used by patients across the country — an oil derived from vitamin E, according to The Washington Post. But it remains unclear whether this is the cause or one of the causes of the illnesses.

The Oregon patient, whose age and gender weren't revealed, reportedly had symptoms that were similar to other reported cases of vaping-related illnesses. Public health authorities are asking clinicians to be alert for signs of severe respiratory illness in patients who recently used such products — which may include shortness of breath, cough, chest pain, vomiting, diarrhea, fatigue, fever or weight loss.

Recently, the Centers for Disease Control and Prevention issued a statement that advised against using electronic cigarettes while it investigates the issue. Even aside from the ongoing investigation, youth, pregnant women or adults who don't currently use tobacco products shouldn't be using e-cigarettes anyway, they wrote.