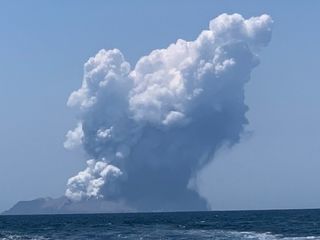 An eruption on White Island in New Zealand has left 5 dead and many injured.
(Image: © New Zealand Police Media Centre)

A volcano erupted violently on a New Zealand island today local time, sending ash up to 12,000 feet (3,700 meters) into the air, leaving five people dead and many missing, according to recent news reports.

White Island, an active volcano that sits 30 miles (48 kilometers) off the east coast of New Zealand's North Island, erupted at about 2:11 p.m. NZDT on Monday (8:11 p.m. EST Sunday night) with little warning. The island is uninhabited but is a popular tourist destination. Dozens of people, both New Zealanders and tourists from elsewhere, a number of them traveling on the Ovation of the Seas cruise ship, were visiting the island when the volcano erupted.

Authorities have rescued multiple people, some who sustained serious burns, and taken them to the nearby Whakatane Hospital and Middlemore Hospital, but many are still feared missing. The search efforts, including flights over the island, stopped for the night because of unsafe conditions.

"No signs of life have been seen at any point," the New Zealand Police said in a statement. When the sun rises again, the New Zealand Defence Force will deploy a ship to approach the island and send out drones, according to the statement.

It's not clear how many people are missing or dead, the New Zealand Police said at a news conference. But rescue teams have likely already found all those individuals who could have been rescued alive, the police said in the statement: "Based on the information we have, we do not believe there are any survivors on the island."

This is the first time the White Island volcano has erupted since 2011, but it's considered one of the most active in the country. Experts at GeoNet, an organization that assesses geological hazards for New Zealand, had put out warnings of increased volcanic unrest at White Island for weeks, but visitors were still allowed on the island, according to The Washington Post.

"Moderate volcanic unrest continues at Whakaari/White Island, with substantial gas, steam and mud bursts observed at the vent located at the back of the crater lake," GeoNet said in a Dec. 3 statement. "Observations and data to date suggest that the volcano may be entering a period where eruptive activity is more likely than normal."

Such activity at the island seems to have decreased since the eruption, while "ash fall appears to be confined to the island and we do not expect more than a minor amount of ash to reach East Cape in the coming hours," GeoNet said in a new statement.