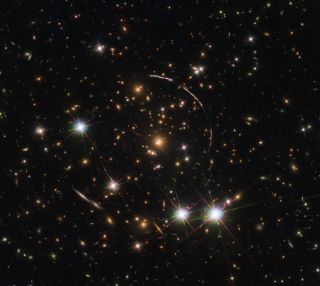 At nearly the beginning of time, the universe was shrouded in darkness. Then, early galaxies produced bright, hot stars that leaked brilliant light intergalactic space through small channels, turning the universe transparent.

That’s the conclusion from gorgeous new "mirror" images taken of a distant galaxy known as the Sunburst Arc. When the universe was just a baby, it was made up of hot, but quickly cooling particles. Once the universe cooled enough, protons and electrons combined to form neutral hydrogen, which covered the universe in darkness, making it unobservable in the electromagnetic spectrum, according to MIT's Haystack Observatory.  During this period, known as the dark ages, any radiation emitted was absorbed by the hydrogen gas.

Then, a billion or so years after the Big Bang, during the "Epoch of Reionization," a massive jolt of energy ionized the gas, knocking electrons off the hydrogen atoms and creating plasma. This ionization happened thanks to energetic ultraviolet light that "most likely came from very young, very bright, very hot and also very short-lived stars in the first galaxies," said lead author Thøger Emil Rivera-Thorsen, a postdoctoral fellow at the University of Oslo in Norway. But it's unclear how exactly this ionization event happened.

To figure it out, the researchers turned to a galaxy called the "Sunburst Arc" that sits around 11 billion light-years away (though it's difficult to know exactly how far it is in an expanding universe.) The Sunburst Arc isn't quite old enough to be one of the early galaxies that reionized the universe, but it's old enough to be able to teach the researchers something about the process, Rivera-Thorsen said.

In a previous study, Rivera-Thorsen and his team looked at light signals coming from the Sunburst Arc. A few hints suggested that ionizing light escaped from these early galaxies through a few narrow channels, or holes in an otherwise opaque shroud covering the galaxy. "But we cannot say that we have found this until we have actually observed it directly," Rivera-Thorsen told Live Science.

So the researchers proposed to detect these holes using the Hubble Space Telescope and "lo and behold, it worked," Rivera-Thorsen said. The Sunburst Arc is positioned in a way that makes it easy for the Hubble to see. An intervening cluster of galaxies acts like a cosmic microscope and bends and magnifies light from the Sunburst Arc — which would otherwise be too faint to see — so that the Hubble can pick it up in a series of images. This effect, called "gravitational lensing," was predicted by Einstein's theory of general relativity and is particularly strong in this case, leading to 12 duplicate images of the galaxy.

Some of these images were taken in the nonionizing, visible-light spectrum and others were taken in the ionizing light spectrum. For the ionizing light, "basically all you can see is one little point and otherwise there's nothing," he said. "That, I think, was a very beautiful confirmation of our hypothesis — that this is like one hole in an otherwise completely nontransparent, gas-covered galaxy."

Several factors had to line up for the researchers to see this effect, and so, "we have been incredibly lucky to find this thing," Rivera-Thorsen said. For instance, the Hubble images happened to capture all the "juicy bits" of the galaxy, including the places where the ionizing light escaped. It's not clear why or how these narrow channels formed in the first place.

What's more, in the more modern galaxies, "we don't really see much of this ionizing radiation escaping, we see a little bit here and there," he added. "So something about the physical properties of these galaxies must have changed quite dramatically between the time around 1 billion years after the Big Bang when the universe was reionized [and now]." In future work, Rivera-Thorsen and his team want to figure out how galaxies have changed since the time of the Big Bang.

"The evidence for escaping ionizing radiation is compelling," said Yuri Izotov, an astronomer with the Main Astronomical Observatory in Ukraine, who was not a part of the study. Their findings are important for understanding how light leaks through from star-forming galaxies, and their interpretation that the light leaks through holes in the galaxy "looks reasonable," Izotov told Live Science.

Brian Keating, a professor of physics at the University of California in San Diego, who was not involved in the work, agrees. "The sources that generated the universe's first ionizing photons have long been shrouded in mystery," Keating told Live Science. "Their work yields promising new insights into the inscrutable objects thought to be the primary drivers of the Epoch of Reionization."

The findings were published on Nov. 7 in the journal Science.