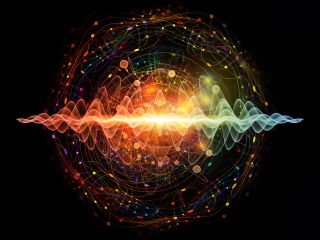 Our universe is governed by four fundamental forces. At least that's what physicists have long thought.

Now, however, new research suggests that there's a fifth force, a discovery that could upend much of modern physics.

On Oct. 23, researchers at the Institute of Nuclear Research in Hungary published a new study to the arXiv database offering further evidence of an entirely new particle first suggested three years ago. Dubbed X17, this particle might help scientists resolve one of the biggest mysteries in astronomy: what dark matter is.

The particle's existence would also require a rewriting of the Standard Model of particle physics, the theory that describes the fundamental forces and classifies subatomic particles.

But that's only if the particle's existence can be verified. The new paper has not yet been peer reviewed. And most physicists are skeptical — in part because no outside scientists have yet been able to independently validate earlier findings from the same research team Richard Milner, physicist at the Massachusetts Institute of Technology who was not involved in the research, told Live Science.

In 2016, the same group of researchers reported the first evidence of the particle, in experiments done with radioactive beryllium atoms. The physicists measured the light and particles released by the beryllium as it broke down. They noticed that emitted pairs of electrons and their antimatter partners, positrons, tended to go speeding off at a certain angle, behavior that didn't seem explainable with existing physics.

Crunching the numbers, the physicists concluded that there must be some unknown intermediate particle that the beryllium decayed into before that particle then emitted the electron and positron pair. This unknown "particle X" was calculated to have a mass of nearly 17 megaelectronvolts, hence its name, X17. (For comparison, that makes X17 about 34 times bigger than an electron.)

The new study added more observations of the proposed particle, seen in the decay of helium atoms. A similar experimental setup again showed evidence of an intermediate particle with effectively the same mass. The findings show that this proposed X17 particle isn't a fermion — the type of particle that makes up ordinary matter — but rather a boson, a particle that carries energy and sometimes forces. This means that X17 might convey a previously unknown, fifth force, which the physicists said could help explain dark matter. That mysterious substance makes up 85% of the matter in the universe; it's detectable through gravity but doesn't interact with light.

But most physicists are waiting for independent measurements before they accept the findings.

"I'm skeptical. I think, as an experimentalist, that's my natural position when I see something like this, but I think it needs to be investigated," Milner, told Live Science.

Part of the skepticism arises because the European Organization for Nuclear Research, or CERN, tried to hunt for the X17 particle and failed to find any evidence of it. In light of the new evidence, many more groups will likely continue to search for the particle, Milner told Live Science.

If confirmed, the discovery could also open a whole new way of doing particle physics, Milner told Live Science. For the past half-century, physicists have made huge progress in defining the Standard Model by focusing on the high-energy realm, which requires huge international collaborations and expensive accelerators to smash particles together at mind-boggling speeds. The new work, done at much lower energies and costs, would be an entirely new direction for physicists to look for new particles.

"The Standard Model of physics is very well defined," Milner told Live Science. "So if one finds a new interaction beyond it, that is just tremendously important."