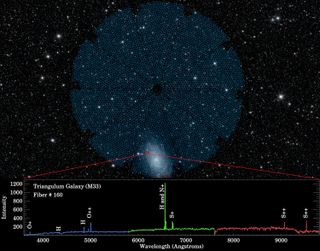 Each of DESI's fiber optic "eyes" can collect light from a single object, such as a part of a galaxy. The instrument then splits that light into different colors to figure out what it might be composed of and how far away that object is. This test spectrum was gathered by DESI on Oct. 22. A single fiber-optic cable (red dot) scans a region of the Triangulum galaxy and splits the light it gathers into a spectrum.
(Image: © DESI Collaboration; Legacy Surveys; NASA/JPL-Caltech/UCLA)

These 5,000 mini-telescopes make up the Dark Energy Spectroscopic Instrument (DESI), which was installed on the Mayall Telescope at the Kitt Peak National Observatory in Arizona. Astronomers recently completed the first test run of the nearly-complete DESI, which, from its high mountain perch, will soon scan the cosmos for dark energy, beginning early next year.

"With DESI, we are combining a modern instrument with a venerable old telescope to make a state-of-the-art survey machine," Lori Allen, director of Kitt Peak National Observatory at the National Science Foundation's National Optical-Infrared Astronomy Research Laboratory, said in a statement.

Related: 4 Dark Matter Experiments to Keep an Eye on in 2019

Dark energy is an invisible force that's thought to be accelerating the expansion of the universe and is thought to make up 68% of it, according to the statement.

DESI is designed to provide precise measurements of the rate of expansion of the universe. To figure out how much of the universe expanded as light from different galaxies traveled to Earth, the instrument will detect light from a particular set of galaxies, split that light into narrow bands of color and use each of those bands to measure the galaxies' distances from our planet.

The instrument is equipped with spectrographs, which split the light and also measure redshift, or the shift in the color to the longer, redder wavelengths of light from objects moving away from us. In five years, the statement said, DESI will have scanned 35 million galaxies and 2.4 million quasars, the brightest objects in the universe.

What's more, DESI will be able to peer into the distant, early universe, going back in time to about 11 billion years ago. At that time, gravity is thought to have slowed the universe's expansion, whereas now, dark energy is thought to be speeding the expansion up.

"By looking at objects very far away from us, we can actually map the history of the universe and see what the universe is composed of by looking at very different objects from different eras," Nathalie Palanque-Delabrouille, a DESI spokesperson and an astrophysics researcher at France’s Atomic Energy Commission (CEA), said in the statement.