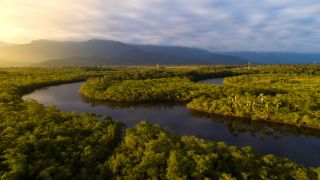 More than 850,000 indigenous people in over 300 tribes live in the Amazon rainforest in Brazil.
(Image: © Shutterstock)

Brazilian health officials identified the first known case of coronavirus in an indigenous person, a 20-year-old woman from the Kokoma tribe. She lives in the São José village in northwestern Brazil in the Santo Antônio do Içá district, near the Colombian border.

The woman, who has not been identified by name, is an indigenous health agent. She worked with a medical doctor named Matheus Feitosa, who last week tested positive for COVID-19, and she is one of 27 people — 12 patients and 15 health workers — who were in contact with the doctor and are being monitored for symptoms, Mongabay reported.

In a social media post shared by the woman on March 31, she described her symptoms as "a dry cough" and loss of her sense of taste and smell; the symptoms appeared three days after she had contact with Feitosa, according to Mongabay.

Feitosa visited the village on March 19 to perform consultations, and the people who interacted with him are now in isolation and are being monitored by officials with the Special Indigenous Health District (Dsei) of Alto Solimões, according to Amazônia Real.

Doctors in Brazil are concerned that the novel coronavirus could prove especially deadly in indigenous communities, where respiratory infections can spread quickly among immunologically vulnerable populations.

"We know that indigenous children have high levels of anemia and malnutrition," Dr. Andrey Moreira Cardoso, a researcher with the Working Group for Indigenous Health in the Brazilian Association of Collective Health (ABRASCO), told the Socioenvironmental Institute, a Brazilian nonprofit.

"Their lungs may also be in a poor condition because they may have been affected by fires [in the forest] and they may have had repeated respiratory infections," Cardoso added.

Brazil has 7,910 confirmed cases of COVID-19 and 299 deaths across the country, the Ministry of Health reported yesterday (April 2). The Kokoma woman is currently in isolation, as are seven of her relatives, according to Mongabay.