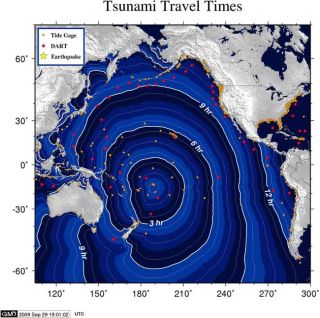 An estimate of tsunami travel times to the coastlines around the Pacific Basin. Australia is at lower-left, Japan near upper-left, and the United States near upper right.
(Image: © NOAA)

WASHINGTON -- At 6:48 a.m. local time, an earthquake shook the floor of the Pacific Ocean. Seismometers detected a magnitude 7.9 quake and alerted the Pacific Tsunami Warning Center in Hawaii. By 7:03, the center had sent out a warning bulletin. "An earthquake of this size has the potential to generate a destructive tsunami," it read. "Authorities should take appropriate action." Minutes later, the center's pressure sensors anchored to the ocean floor felt the pressure wave of the tsunami pass and transmitted this information via buoys on the surface. Calculations confirmed waves up to a meter and a half higher than sea level, four meters trough-to-crest. "Sea level readings indicate a tsunami was generated," read a new warning bulletin. But even before the first warning was issued, it was too late for the inhabitants of the island American Samoa, which had been struck by the tsunami five minutes after the first of the tremors. Preliminary reports indicate that at least 100 people were killed by the waves of water, which struck Samoa, American Samoa, and Tonga. On Tuesday, a section of the seafloor along the boundary of the Pacific and Australian tectonic plates shifted directly upward, creating the tsunami. The uplift was caused by a "shallow" earthquake that shook for two to three minutes and was upgraded to a magnitude of 8.3 by the end of the day. It occurred about 20 miles below the surface and centered about 120 miles south of the islands of Samoa. "It is a 'normal fault,'" said John Bellini, a geophysicist with the National Earthquake Information Center in Denver, Colo. "It is like two blocks of wood, and when the earthquake occurs, the blocks move up and down." The block moving upward also pushes water up, creating the tsunami. "In a slip fault, like the one in California, the plates are moving past each other [sideways] and you don't get a tsunami," he said. Another type of earthquake is triggered by a "thrust fault," in which one tectonic plate pushes over another one. It was a thrust fault quake that triggered the devastating 2004 tsunami that originated in the Indian Ocean and killed more than 23,000 people. Tuesday's event generated two main beams of waves -- one of which was directed towards nearby American Samoa, while the other headed out into the open waters of the Pacific Ocean, dissipating to six-inch-high waves near Hawaii. "Tsunamis don't behave like when you throw a pebble in a pond and identical ripples move in every direction," said Diego Arcas, who creates computer models of tsunamis at the Pacific Marine Environmental Laboratory in Seattle, Wash. "They actually like to travel only in specific directions determined by the topology of the seafloor." Preparations for tsunami events start long before the earthquakes occur. Computer models crunch historical data to pre-compute the expected effects of different kinds of earthquakes. When seismometers pickup a potentially tsunami-triggering earthquake, the warnings draw on these scenarios to predict when the waves could be expected to hit different communities. To confirm that an earthquake has indeed generated a tsunami, the Pacific Tsunami Warning Center uses a network of 39 pressure sensors anchored to the floor of the ocean. These sensors an be used infer the height of the waves passing above. Though all of these sensors did what they were supposed to on Tuesday, there simply wasn't time to warn American Samoa or to prepare Samoa. Pacific tsunamis tend to move at speeds of 500 mph, depending on the depth. And the islands were too close to the center of the quake. "People who live in areas where tsunamis can occur are generally educated about them," Bellini said. "If you feel an earthquake, get to high ground as fast as you can. Five minutes was not enough time for emergency services to move into action. It is hard to get a warning out faster than five minutes, so people have to know to move to high ground." But it is difficult to condition people to move to high ground when there are fairly frequent earthquakes that don't result in a tsunami. "If that happens a few times you don't react, and then there is a tsunami," he said. Bellini said an 8.0 earthquake happens about once a year somewhere on Earth, but 7.0 to 7.9 earthquakes occur about 17 times per year.