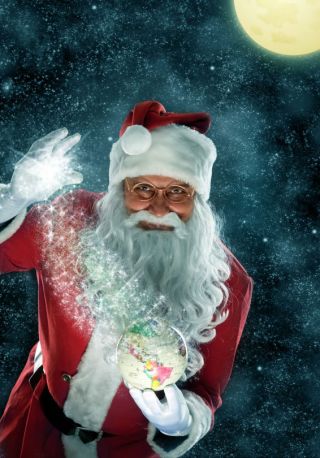 It wasn't until 1809 that Santa Clause got fat, and by the late 1800s he was wearing the full red suit with the fur trim and leather boots. Image
(Image: © stockxpert)

He is overweight, constantly flushed, trying to accomplish a superhuman feat – and may be using cookies to deal with the stress.

Should we be worried about Santa's health? [Santa Claus: The Real Man Behind the Myth]

In advance of his epic journey on Christmas Eve, we asked a doctor to give him a checkup.

While some may attribute a ruddy appearance to fever or worse (too much mulled wine?), Dr. Rachel Vreeman of the Indiana University School of Medicine thinks Santa's rosy complexion is likely benign.

"Santa Claus may have rosacea," Vreeman said, "which is actually pretty common, especially in people who are fair." Rosacea is a chronic but usually harmless condition that typically causes redness in the middle of the face.

While for some people, rosacea may be triggered by certain foods and drinks, in Santa's case, Vreeman suspects it is caused by being out in the cold wind.

"Most likely it is his hearty lifestyle outside in the sleigh," she said. "It could also just be chapped skin."

Spotted kissing mommies in homes across the globe… at risk for mono?

Kissing more people can raise the risk of passing infections, Vreeman said. And not only is Santa kissing mommies worldwide, but his lap is visited by millions of sniffling children each December.

To reduce his risk of getting sick, Vreeman advised Santa to wash his hands often and to avoid kissing mommies who are coughing and sneezing. But she isn't overly worried about him catching mono, the flu or other infections.

"Santa is so happy and full of joy, he may be more resistant to coughs and colds," she said, explaining that positive attitudes may provide some health protection.

Even the jolliest gift-giver can get worn out by the effort. And here is Santa, working year-round and pulling at least one all-nighter to satisfy the wishes of the world's children. An overachiever, he takes his job very seriously, regularly checking in with parents across the globe and constantly updating mile-long lists to keep track of who is naughty and who is nice.

Surely the stress puts Santa at risk for cardiovascular disease, migraines, depression and other disorders linked to taxing lifestyles?

Not so, Vreeman said. People who feel a sense of purpose at work tend to be healthier. "So even though Santa is a very hard worker, the other characteristics of his job probably protect his health."

And recently, Santa dramatically cut his health risks by kicking his nicotine addiction — a step Vreeman praised, noting that pictures of St. Nick enjoying a pipe are now hard to find.

A belly that shakes when he laughs, like a bowl full of…

The doctor's only concern about Santa's health is his body mass index, or BMI. He falls into the "obese" category, and his large waist-to-hip ratio could reduce his life expectancy, Vreeman said.

That is, if he weren't immortal.

Still, she explained, "we would like to keep his heart healthy and help him avoid diabetes."

Santa does not need to give up cookies and milk, but eating them at every house worldwide may be a little excessive, Vreeman said. That said, holiday treats are not the cause of Santa's weight problem.

It's what he is doing year-round that counts, Vreeman said, emphasizing exercise as well as a healthy diet.

"Santa does get some exercise sleigh-guiding and hopping down chimneys," Vreeman said, but he should find ways to exercise the rest of the year, too.

Overall, the doctor gave Santa a clean bill of health and cleared him for duty this Christmas Eve.

"Clearly, Santa's happy, jolly demeanor shows that he likes what he does," Vreeman said, adding that he manages to balance his intense but purposeful work life with a happy home life, hanging out with Mrs. Claus and the elves.

Vreeman's only advice to Santa was to resolve this New Year's to work more movement into his regular routine, whether it is by skiing the Arctic slopes, riding Rudolph or joining Mrs. Claus for Bikram yoga classes.

"In the midst of his generosity, he needs to take care of himself as well," she said.