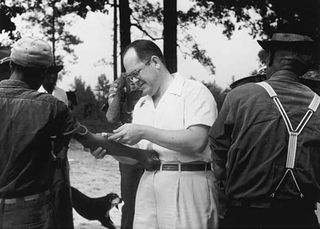 A dark chapter of medical research reopened last week with an official U.S. apology for infecting Guatemalan prisoners with syphilis and gonorrhea in past experiments. But the medical historian who  dug up the documents about the late-1940s work now worries about the blurring of myth and reality regarding the history of medical experiments.

Her particular concern is the popular belief that U.S. Public Health Service researchers intentionally infected African-American men with syphilis during the infamous Tuskegee study in Alabama. They didn't infect the men; instead they didn't treat them.

The researcher who led the Guatemala experiments also worked on the Tuskegee study – a revelation that may add fuel to the Tuskegee myth.

Yet the Tuskegee myth still does not hold up, according to Susan Reverby, the medical historian at Wellesley College in Massachusetts who discovered the Guatemalan experiments by chance while going through the researcher's papers. She said Guatemala actually demonstrated the difficulty of infecting people with syphilis.

"I think Guatemala showed how hard it was to give people the infection," Reverby explained. "I had thought it would help with (eliminating) the myths."

Even so, both sets of experiments revealed how doctors were okay tiptoeing (or running) across moral boundaries with human subjects, scientists say. And many may have been aware of unethical doings. In fact, one famed virologist suggested in his memoir such experiments are the only way to make any progress. [7 Absolutely Evil Medical Experiments]

Trying to infect a person with syphilis during the Guatemala studies often meant scraping the forearm or penis with hypodermic needles and then putting syphilis-infected liquids on the area, or injecting the material into a forearm vein. Surely the Tuskegee survivors would have recalled such procedures if they happened, Reverby said. They didn't.

In addition, preparing the syphilitic mixture for infection required money spent on "host" rabbits (whose testes were ground down for usage) and laboratories. None of the Tuskegee records from 1932 until 1972 show money being spent on such things.

The Guatemalan case also differed from the Tuskegee study on another crucial point – researchers actually treated Guatemalan test subjects with penicillin if they became infected with syphilis. That's because their experiment focused on testing different ways to prevent or treat syphilis.

By contrast, researchers chose not to treat African-American test subjects at Tuskegee with penicillin, and even withheld information about the treatment. Their reasoning was that they wanted to see how syphilis progressed in the human body over time.

Tuskegee "is part of a larger legacy where people used a means to the ends," said Leonard Glantz, a bioethicist at Boston University. "A scientific imperative overcame the ethics."

When the law winks

The Guatemalan experiments conducted by John C. Cutler, a Public Health Service physician, showed how researchers were willing to cross moral boundaries by trying to infect people. And the researchers knew it: Letters among them showed they worried about news of the study leaking out.

"The PHS authorities knew it was on an ethical edge," Reverby said in an e-mail. "However, this is a period where any kind of voluntary consent, not to even go as far as informed consent, had not yet been required."

It was an era before informed consent or review boards to approve medical experiments had become widespread. Even some individual physicians felt free to treat patients as experimental test subjects, despite the laws already on the books. Virologist Chester Southam injected both terminal and healthy patients in the United States with cancer cells several times.

"Unless the law winks occasionally, you have no progress in medicine," said Thomas Rivers, a famed virologist who headed the Rockefeller Institute for Medical Research Hospital in New York, in his 1967 memoir.

Not out of the woods

Public outrage over Tuskegee and other infamous experiments led to reforms meant to safeguard the rights of human test subjects. But historians and bioethicists say the problems of the past regarding medical research have not vanished, only mutated.

"Our problems have evolved — partly because of success of reforms, which have made earlier problems rare, fortunately, but also because we live in a different world," said Robert Aronowitz, a physician and medical historian at the University of Pennsylvania.

Some current ethical issues look eerily familiar. Many medical studies today take place in developing countries where well-funded researchers approach poor people with the temptation of money or medical care — not unlike how PHS researchers gave certain medical drugs or supplies to the Guatemalan authorities in exchange for their cooperation.

That power imbalance can taint the idea of poor people giving informed consent to become human guinea pigs, because poorer people face a greater temptation to volunteer than better-off people do, Aronowitz said.

"People want to give up their bodies to get these resources," Aronowitz told LiveScience. "And what happens if you provide all these clinical services during the trial and then withdraw when it's over?"

Examining today's ethical issues is perhaps even more important than weighing past incidents against one another, according to Glantz of Boston University.

"I don't think they were worse than Tuskegee," Glantz said of the Guatemala experiments, "but then again, I don't think you have to measure atrocities against each other."