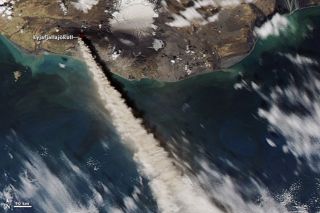 The continuing eruption of Iceland's Eyjafjallajökull volcano had shot an ash plume 17,000 to 20,000 feet (5 to 6 kilometers) as of yesterday, when it was photographed by a NASA satellite.

The Moderate Resolution Imaging Spectroradiometer (MODIS) on NASA’s Aqua satellite has snapped many pictures of the long-lasting eruption in over the past few weeks, and took another that clearly shows the billowing ash plume and the island of Iceland on May 10.

The ash is blowing southeast over the North Atlantic Ocean, and has caused airports to close in Ireland and Portugal, according to news reports. Researchers in Britain who have studied the distribution of ash falls from historical Iceland volcano across Europe suggest that Spain is largely spared in these events and could be a good emergency landing hub for airplanes.

In the Aqua image, a red outline marks the location of a hot spot (probably lava) on the summit of the volcano. Around the volcano is a landscape of black. Dark ash covers the snow on the volcano as well as the land farther away.

Farms south of the erupting volcano reported that ash fell throughout the day on May 10, according to the Icelandic Met Office.

The icecap east of the volcano — called Myrdals-jökull — is painted with two black stripes that reveal where the wind blew concentrated plumes of ash in previous days.

The eruption at Iceland’s Eyjafjallajökull volcano began on March 20, 2010. Earthquakes beneath the volcano on May 10 indicate that magma is still flowing into the volcano for an ongoing eruption, the Icelandic Met Office said.