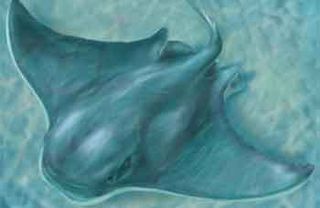 An artist's rendering of a Bat Ray.
(Image: © Joe Sharkey)

Off the coast of California, the bat ray Myliobatis californica glides over the seafloor looking for buried clams to eat. Well, “looking” isn’t the right word. The ray’s eyes, after all, are on top of its head, not great for looking down.

So how does the bottom dweller detect prey?

One way, already observed in another ray species, would be by sensing the jets of water buried clams sometimes expel. So Laura K. Jordan, of the University of California, Los Angeles, and two colleagues simulated clam jets at the bottom of a large tank, and then watched the effect on wild-caught bat rays.

The rays did indeed stop over the jets to bite at their source. They sensed the jets through their undersides, which are equipped with a well-developed lateral line system—the series of pores and canals that enables all fishes to detect water movements. Jordan’s team also tried the trick with two other ray species that don’t eat clams; their lateral line systems are much less complex, and they responded to the jets less than half as often as did the bat rays.

The team also studied the rays’ sensitivity to the electrical fields that all living organisms (including buried clams) produce—a sensory specialty of sharks and rays. All three species bit enthusiastically at dipole electrodes the scientists hid at the bottom of the tank, but the bat rays may have set a new record by detecting signals weaker than 0.1 nanovolt per centimeter. That’s less than a billionth of the electrical field generated between the poles of an AA battery.

The research was detailed in the Journal of Experimental Biology.